The first British-built D.H. 82 Tiger Moth for Canadian use was assembled at Downsview, Ontario in the summer of 1935. The Tiger Moth was an obvious replacement for the DH 60 Moth that was in air force service at the time, but the RCAF was in a state of hold and was without a budget. In May 1936, Phillip Garratt, a First World War pilot, became General Manager of de Havilland Canada. Garratt designed an all Canadian version of the Tiger Moth incorporating the RCAF's requested changes to the original design. These included an enclosed cockpit suitable for winter flying, heavier axles that could accept skis, a padded instrument panel and other refinements. Tigers incorporating these design changes were designated DH 82C to distinguish them from their 'A' model English cousins. In early 1937, Garratt finally won a long sought after order from the RCAF for 26 Tiger Moth trainers. A condition of the sale was that the Tiger Moths would be manufactured, not just assembled, at Downsview. Eventually 1747 Canadian Tiger Moths were built by de Havilland and these aircraft equipped many Elementary Flying Schools throughout the country. RCAF Tiger Moths flew an impressive 1,778,348 flying hours during the war and equipped more than 20 flying schools. 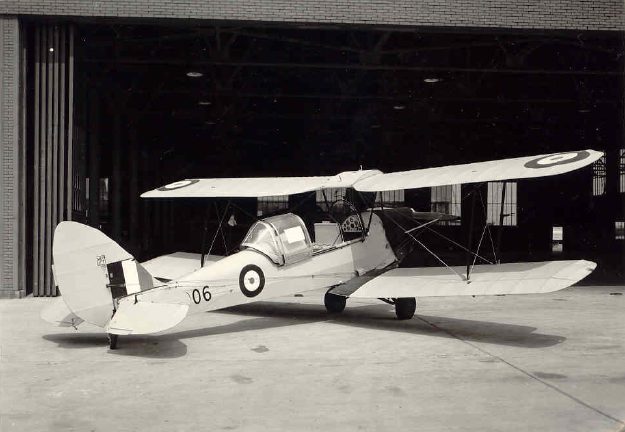 
The Tiger Moth is a two place airplane designed in a "tail dragger" configuration. The fuselage is built around a tube steel frame shaped with wood and covered in fabric. The wings are an all-wood structure also covered in fabric. It is powered by a four cylinder, air cooled Gipsy Major 1C engine.

The Tiger Moth was designed as a military trainer and was used mainly for elementary pilot training in the British Commonwealth Air Training Plan. Modifications were made to the basic design to adapt it better to Canadian conditions. One of the best known trainers in World War II, the Tiger Moth was used by the air forces of Britain, Canada, Australia, Brazil, Denmark, Iraq, New Zealand, Persia, Portugal, South Africa, Southern Rhodesia, and Sweden.

Tiger Moth #1405 had the distinction of being one of a batch of Tigers originally destined for the United States Army Air Force as a PT-24 with the USAAF Bureau Number 42-1066. Before it could be shipped south, it was rerouted as a Lend-Lease aircraft to the RAF as FE202. As soon as #1405 left the factory at Downsview, Ontario in January 1942, it was put to work as an initial training airplane as part of the British Commonwealth Air Training Plan. It was sent west to join #4 Training Command and was assigned to #34 Elementary Flying Training School (EFTS) at Assiniboia, Saskatchewan. #34 EFTS was opened by the Royal Air Force and was later taken over by the Winnipeg Flying Club and renumbered #25 EFTS. When it was operated by the Royal Canadian Air Force during World War II, the RCAF designated the aircraft as #1202.

By war's end, #1405 had survived at the hands of the ham-fisted, the terrified, and the natural and accumulated a total of 1155:25 hours of flying time. For dozens, perhaps hundreds destined for war in the air, she was their first. She was struck off strength by the RCAF on July 28, 1945.

Later in 1945, #1405 was transferred to #2 Training Command to became one of the two hundred and more Tiger Moths which were offered to clubs of the Royal Canadian Flying Clubs Association to begin a new phase of her life as an initial training aircraft for civilian pilots. Records indicate that it was stored for some time at the site of #26 EFTS in Neepawa, Manitoba, a station operated by the Moncton Flying Club during the war. #1405 eventually joined the civilian registry as CF-CLK until it was de-listed in 1982. It was eventually acquired by Ron Jackson of Calgary, who began a full restoration on the aircraft completing the fuselage and empennage as well as a complete rebuild of the engine. Ron sold the aircraft to Collin Markle in 2003. Both Ron and Collin permitted the aircraft to be displayed in the museum during their ownership.

The museum acquired Tiger Moth #1405 from Mr. Markle in 2008. The museum has rebuilt the wings and the Tiger Moth is now on static display. The aircraft carries the numbers "4080," the number of the aircraft in which Murray Peden DFC soloed at #5 EFTS in High River. 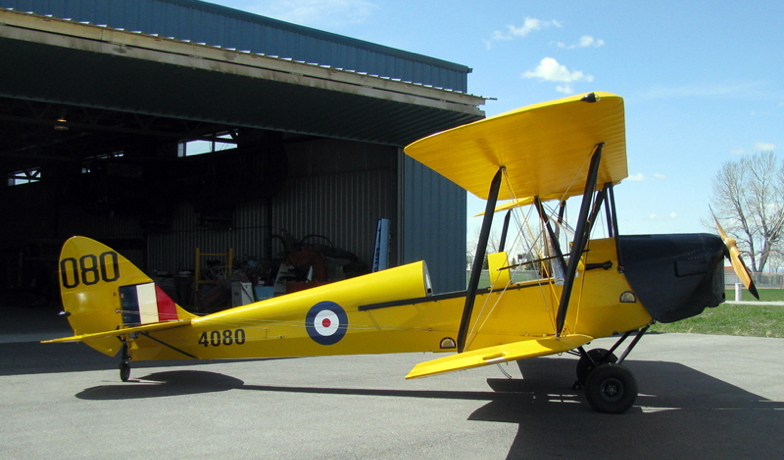 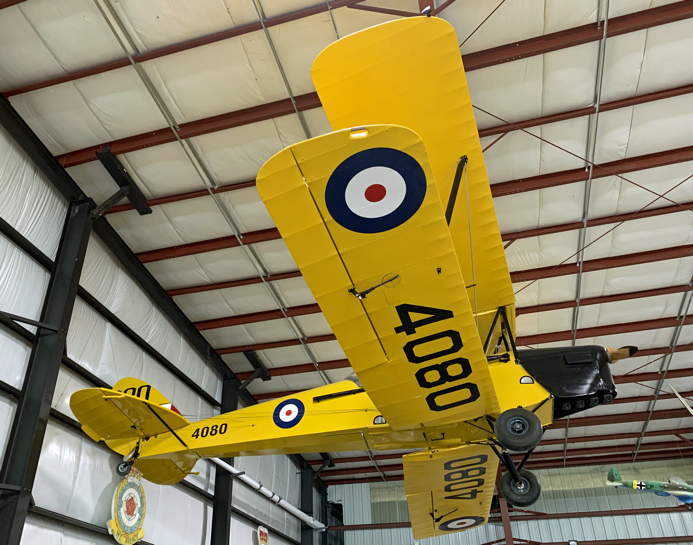 This aircraft (Serial #1214) was built in Canada and delivered to the RCAF on 12 February 1942, serving at 5 EFTS in High River. Following the war, its owners and the aircraft's history are not clear, although it is known that it was operated by the Edmonton Flying Club and then, in the early 1970's, stored in a dairy barn in the Edmonton area until it was restored to flying condition in 1984. '1214' was purchased by Gordon Jones of High River who made arrangements for his Tiger Moth to be donated to the museum following his death. Although the museum flew the aircraft as recently as 2017, Tiger Moth 1214 is currently maintained in 'taxiable' condition.

Posted to 5 EFTS in High River during August 1941, Gordon Jones learned to fly in Tiger Moths, flying 1214 ten times as a student. After completing his training at 7 SFTS in Fort Macleod, Gordon became a flight instructor. He was then posted back to 5 EFTS, where he instructed rookie pilots on the Tiger Moth prior to the biplanes being replaced by Cornells in late 1942. Following the war, Gordon farmed near High River but continued flying and his career as a flight instructor.

After renting 1214 to be part of a 5 EFTS Reunion in 1992, Gordon purchased the aircraft in 1994. He kept it in his private hangar at High River, flying it regularly until he was 90. Gordon was a regular volunteer at the museum and always happy to perform flypasts during museum special events. Gordon's biography, 'Wings over High River' by Anne Gafiuk has been published by the museum and is available in the museum's shop. 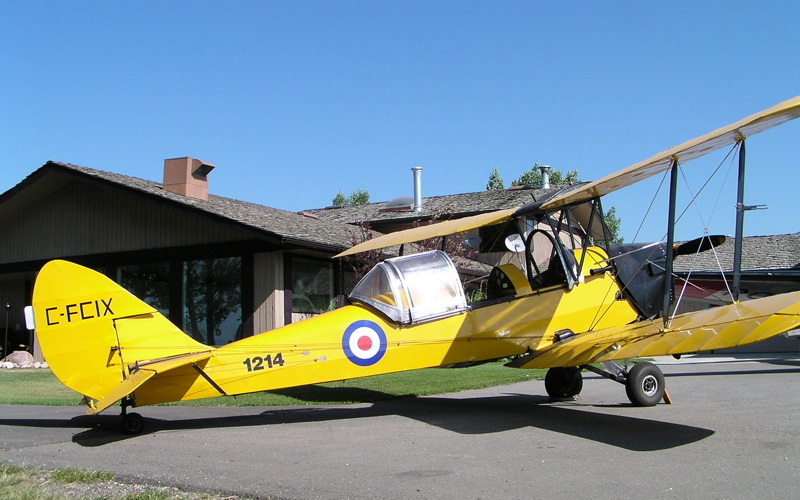