Anne Gafiuk operates "What's in a Story?" a freelance writing service.
Our museum is fortunate that Anne has documented the story of our good friend, Gordon Jones.
The article was first published in the Summer 2012 edition of Airforce Magazine. 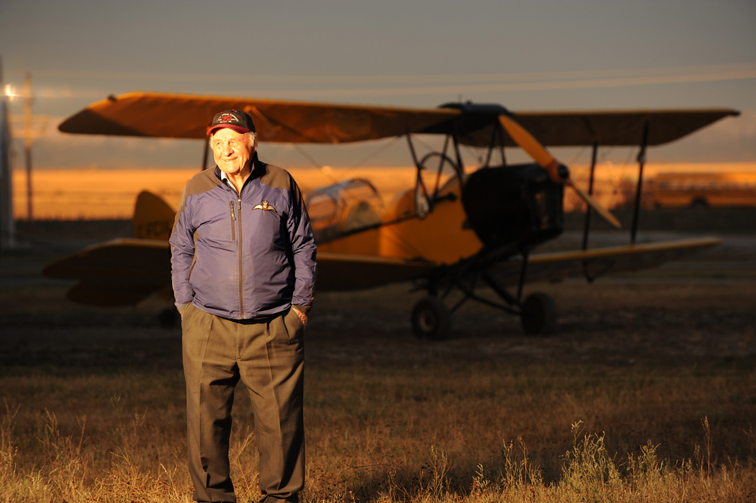 
Vintage Wings of Canada, the group of dedicated aviation enthusiasts who "acquire, restore, maintain and fly classic aircraft", flew over the Bomber Command Museum in Nanton, Alberta on July 10, 2011 as part of their Yellow Wings cross-Canada tribute held to honour and remember the establishment in 1939 of the British Commonwealth Air Training Plan (BCATP). The BCATP was a remarkable Canadian industrial and military achievement involving every province and connecting hundreds of small and mid-sized communities to each other, all for a common cause: to prepare and train airmen during World War Two. No other Canadian war effort was able to touch Canadians across the country like the BCATP.

Joining them that day in July, up in the crystal clear blue skies above one of those small prairie towns in southern Alberta, leading the way, was none other than High River's Gordon Jones, eighty eight years old, proudly flying his privately owned bright yellow 1942 Tiger Moth 1214.

On August 13, just over a month after the flyover, Gordon Jones celebrated seventy years of flying a Tiger Moth. To mark this significant anniversary and milestone, he climbed into his airplane just as he did those many years ago. Back then, he was a new, inexperienced pilot; the difference this time: he took his Tiger Moth into the air with skill, knowledge and over ten thousand flying hours behind him!

Anola Laing of Claresholm, located south of High River, relates, "We take him for granted." This long time friend of Gordon's and former member of The Canadian Ninety-Nines, an international organization of women pilots adds, "He is a fixture around here."

Born in Bangor, Saskatchewan in January 1923, Gordon grew up on a farm until he was thirteen years old. His father then decided to move the family of eleven to Saskatoon. "It was the Depression and times were tough!" he expounds.

Gordon's father, a veteran of the First World War "lived in the trenches for a year and a half"; when the Second World War broke out, Gordon contemplated signing up, but into what arm of the Services? "My father did not recommend the army for me because I could return to the trenches like him. Well, I never liked the water, either," he laughs, "so my only option: join the Air Force."

In his meticulously kept flight log books, dating back to August 1941 when he was posted to High River, Alberta to learn how to fly, a Tiger Moth was the first airplane listed. "I'd never been in a plane before that day!" exclaims Mr. Jones. "I went to air shows in Saskatoon for quite a few years when I was a boy, but never sat in an airplane until then." Later on that year, he recorded the 'Tiger Moth 1214' as the plane he flew.

Starting out as an eager student and becoming part of the BCATP in 1941 at the tender age of eighteen, Gordon began his career with the Royal Canadian Air Force. "I turned eighteen in January of 1941, so I went in to try to get into the Air Force. At the start, I didn't pass the medical. It had to do with breathing into something and holding the pressure up. I had to hold my breath for a whole minute. I must have failed it because I was told to come back in a couple of months. Then I was practicing holding my breath until I went back in and I finally passed."


Thinking he was going to be sent overseas with the rest of his course graduates, he returned home to his family in Saskatoon for two weeks. "I received a telegram on January 2, 1942, telling me to report to Trenton, Ontario for Instructor Training. It was kind of a shock, really. When we graduated, we had an interview with a committee. If you wanted to be an instructor, you would have asked to be put there. I had agreed at that time that I wanted to go overseas. That's what they put me on." But the RCAF had different plans for Gordon Jones. As ordered, he reported to Trenton. "My files had already been sent overseas and all I had was the telegram, which Trenton accepted." He started his Instructor Training.

In 1992, Gordon borrowed Tiger Moth 1214 during a reunion of the #5 Elementary Flying Training School (EFTS) and then had the opportunity to purchase it in 1994. "A fellow in Edmonton rebuilt it and got it refurbished in 1984. I had seen it in his dairy barn, in the early 70's: all in parts. It had been used at the Edmonton Flying Club for awhile. And he finally got it rebuilt. Then he hardly flew it at all. He had a heart problem and he couldn't fly it. I was after him to sell it, and he finally sold it to me." Today, the same plane is Gordon's own, stored in his personal hangar at the High River Airport, one hour south of Calgary.

Gordon has been enjoying flying his Tiger Moth ever since. "I flew it about ten times during my training." (His log book indicates he has flown one hundred six different Tiger Moths.) "I wonder if there is some kind of record," he ponders. "Are there any other pilots out there who have flown the same type of plane for seventy years? I don't think there is anyone around that I would know that started off in Tiger Moths and are still flying one. Seventy years! If it is a record, I would like a record."

With evidence from the octogenarian's first log book up to his most recent log books, the record appears so. "I am pretty sure that Gordon is the only pilot flying a WWII aircraft that he actually flew during the war on a regular basis. There are still WWII pilots flying around the world, but in order to meet the criteria, the youngest person who is able to claim this would be around eighty three. Obviously this does make him unique," says Mark Peapell, Past President of the Atlantic Canada Aviation Museum, Halifax, Nova Scotia and one of the Directors with the Canadian Aeronautical Preservation Association (CAPA). "In the United Kingdom, one of the most famous is Wing Commander Kenneth Horatio Wallis. I think he is over ninety. After a very active wartime career, post war he specialised in flying autogyros. He still flies an autogyro which he flew in an early James Bond movie You Only Live Twice. There is also another pilot in Australia that maybe still flying. Another Canadian, Russ Bannock, WWII ace Mosquito pilot and post war test pilot (de Havilland) may still be flying, but he obviously isn't still flying the plane he flew during the war. There may be others, but not like Gordon's record with the Tiger Moth," Mark concludes.

Celebrating the important historical contributions the BCATP made in the community, in downtown High River, a mural painted on the Telus Building in 1994 features Gordon as a twenty one year old pilot. He stands at attention as he did in 1943 for an "official photograph". The Governor General plus the Commanding Officer of the base at the time are also featured in the mural, as well as the training aircraft and the base's buildings. Gordon explains, "I was a consultant for the mural. I was asked for my advice and contributed ideas to the training school base model located at the Nanton Bomber Command Museum, too."