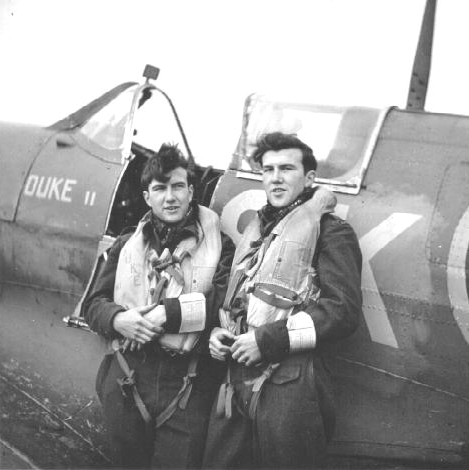 Identical twins Bruce and Douglas Warren were born in Nanton in 1922. Joining the Royal Canadian Air Force at age 18, they completed their elementary flying training at #5 EFTS at High River. During this training they often flew over their hometown of Nanton.

In March, 1945 the identical twins were awarded the Distinguished Flying Cross by King George VI, who remarked, "I don't believe I have ever done this before."

Douglas Warren continued his career with the RCAF following the war. After flying the Vampire, he became CO of the F-86 Sabre equipped, 410 Squadron in 1952. The following year he was attached to the USAF and flew Sabres in Korea. He became chief flight instructor at the RCAF's Operational Training Unit at Chatham, New Brunswick and then served in a similar role in Germany, assisting the post-war Luftwaffe in forming their Sabre Operational Training Unit at Oldenberg. There he found himself working side by side with Eric Hartmann, the greatest fighter ace of all time with over 350 kills. So just 15 years after assisting in shooting down a German bomber at the Raid on Dieppe, Duke found himself teaching Luftwaffe jet fighter pilots. His official title was Squadron Leader Warren-RCAF, Chef Kancdisches Beraterteam, Waffenschule 10 Fliegerhorst, Oldenberg i. Oldbg, Germany. He was told that his translated to, Chief Canadian Aid Team, Weapons School 10, Flying Base (Military) Oldenburg City in Oldenberg Province. 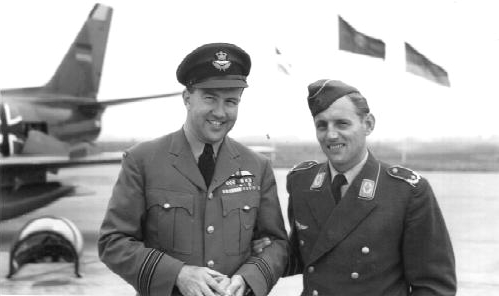 Duke Warren (left) and Eric Hartmann with a Luftwaffe F-86 Sabre in the background.

Duke Warren served a total of 37 years with the RCAF/CAF including his time in the RCAF Reserve.
The wings on his right chest are those of the German Luftwaffe,
the result of service with the German Airforce at Oldenburg.
They are "official" and covered by documentation between Canada and Germany.


Duke retired from the Canadian Armed Forces in 1973. He is a lifetime member of the Nanton Lancaster Society and served as Master of Ceremonies at the Dedication of the Ian Bazalgette Memorial Lancaster and at our "Salute to Those who Served" event in 1996. 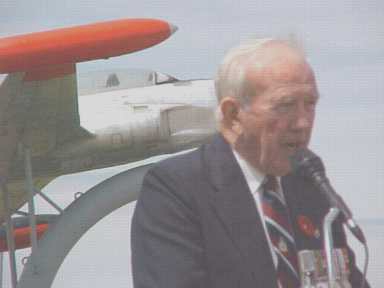 On 1 February, 2007 Duke was awarded the Legion of Honour by the president of France, Jacques Chirac.
The presentation was made during a ceremony in Victoria, British Columbia.


Fifty years after Bruce Warren was killed in the crash of a prototype CF-100 jet,
the Nanton Lancaster Society has dedicated a garden in front of the museum's CF-100
in memory of a local pilot who made a significant contribution to Canada's aviation history
both in wartime and afterwards as a test pilot. 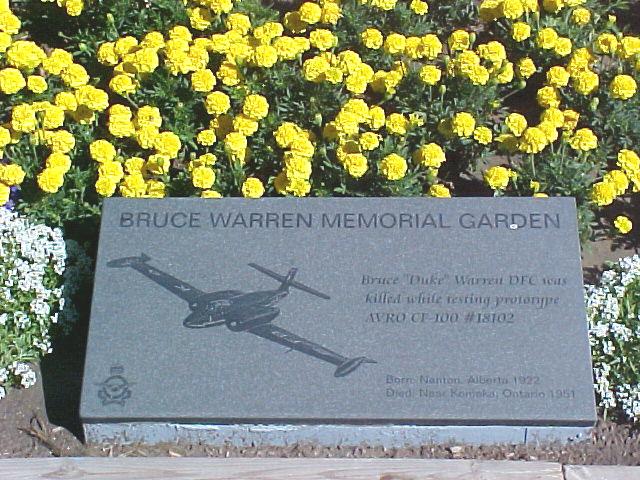 Douglas Warren and other members of the family attended the dedication
of the Bruce Warren Memorial Garden on June 24, 2001.


The museum's 5/8th scale Spitfire replica hangs from the ceiling in honour of the Warren Twins and Fighter Command.
The markings are those of No. 165 Squadron.
The starboard side of the fuselage carries the markings of Douglas Warren and the port side, the markings of his twin, Bruce. 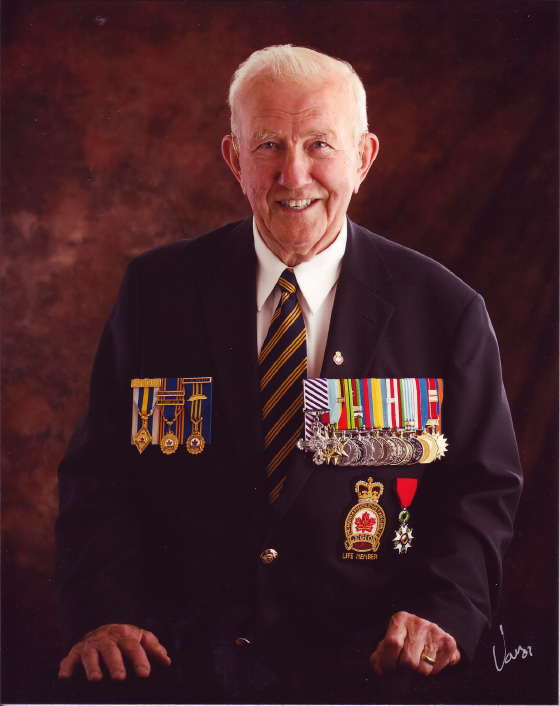