A Lancaster tire acquired by the Museum in 1986,
has been one of the more popular displays in the museum ever since.
Visits to the museum by two of the aircrew who flew on the aircraft equipped with this tire
have evoked memories for the gentlemen involved and resulted in newspaper articles in the Calgary Herald.


The Story of a Tire
by Jon Spinks

In July, 1945, KB773 returned to Canada. It was eventually flown to Claresholm, Alberta for storage and later to Vulcan, Alberta. In 1948, War Assets announced the sale of a number of aircraft, including nine Lancasters, at Vulcan. Although the radar units, bomb sight, and guns had been removed, the aircraft were in very good condition. Farmers Allan McLean and Ken Bjornson went 50/50 on KB773, purchasing it at auction for $350, and towing it backwards from Vulcan to the McLean farm. Others bought Lancasters as well and over the next few years aircraft were common on farms in the area where they provided much needed nuts, bolts, rubber, wiring, and other items made scarce by wartime rationing. As well, escape hatches became outhouse windows, spinners were used in chicken coops, fuels tanks hauled farm fuel, and tires were used on town graders. 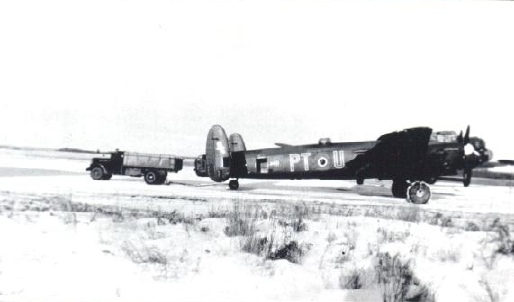 Towing a Lancaster to the farm.