The Rainier Picture
- The Best of the Snowbirds


The Nanton Lancaster Museum's Tutor (#177) was flying as #9
when what is generally regarded as one on the finest photos ever taken of the team was obtained on July 20, 1979.
Capt. Ray Hansford was piloting #177 that day and the aircraft can be seen at the right edge of the "Big Diamond." 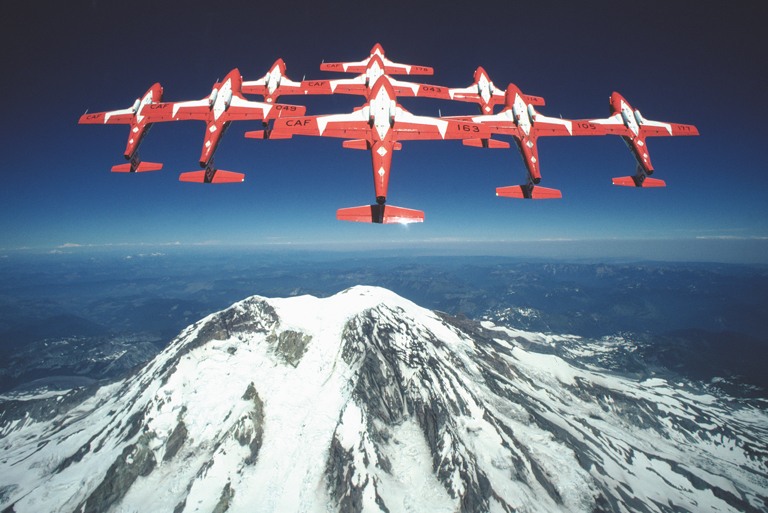 Photographer Bill Johnson wrote the following description of the effort that went into acquiring this wonderful photograph.
It is taken from his book, "Snowbirds from the Beginning" and presented here with his permission.

As the photographer aboard the photo chase Tutor on that amazing, almost surreal day of high altitude formation aerobatics, I was the beneficiary of some exceptionally good fortune.

The idea for the Mount Rainier photo had come several years earlier, and it had existed as a drawing, or more accurately, as a storyboard, since 1973. We had figured the sun angle and the relative position of the chase plane to the formation, and had decided that we would need a loop with an apex of some 17,000 or 17,500 feet in order to place the summit of the mountain sufficiently below the horizon, as it was diagrammed on the storyboard. I didn't realize it at the time, but in typical art direction fashion, I had come up with a situation that was almost impossible to execute -but that was someone else's problem. It always is!

George Miller led the formation during the first attempt. When we arrived in the shooting area, we found classic Mount Rainier weather: high clouds and bone-jarring turbulence. George tried, but there was no way to get all those underpowered little airplanes past the nose-up vertical in those conditions. We did a few wingovers, and went home.

One of the wingmen that morning in 1974 was solo pilot Tom Griffis. When Tom came back to the Snowbirds as Team Leader in 1979, I brought up the unfinished business of the "hero shot" we had attempted to get five years earlier. I was pleased to learn that he hadn't forgotten either. We discussed at length the myriad problems involved, and made the decision to give it another try when the team came to Paine Field show (Everett, Washington) later that season.

My chauffeur was to be Yves Bosse, a superb young aviator from Quebec with an uncanny feel for flying photographers. That was my second bit of good fortune -Tom's continued interest in the project being the first. Our main worry was the weather. On the day before we were to fly, a storm came screaming through Puget Sound that suggested we might not get off the ground the next day, much less take any photos.

The big day dawned crystal-clear; you could see forever. When we arrived at the summit we found the air to be very cold (this was the 20th of July!) and practically dead calm. That last part is almost unheard-of for the top of Mount Rainier, at any time of year. Things were looking promising.

Tom made the initial test run-in very low over the summit, actually flying through the saddle formed by the edge of the crater. As we trailed the Big Diamond across the snow-filled depression, I clearly saw a group of climbers not far below, looking up at us as we flashed over their heads. Here they were, I thought, in what should have been the most private of places, and ten red, white, and blue jets were trying to run them down! The formation cleared the opposite edge, and Tom headed them downhill to pick up speed.

The pull-up for the loop was very gentle, so as not to bleed off too much energy. The loop was enormous; we seemed to take forever to get to the float. From entry to apex, I learned later, we gained about 6,000 feet, with our over-the-top altitude right at 17,500! What I was seeing through the new 15 mm lens (I should have never taken up a brand-new piece of equipment on a shoot this important, but I did and I lucked out. More good fortune.) was what I had expected to see -except that I had forgotten to call for smoke, and the shot was planned with smoke trailing behind the formation.

Near the top, our Tutor began to lose ground: Yves was out of power. As we slowly fell back, I could see that Jim Reith in Second Line Astern was slipping back as well. But we got the shot; I knew we got the shot. Then Tom announced that it was a "piece of cake" and that we would do some more.

We remembered the smoke for the next loop, and for the several that followed; but as things turned out, the "mistake," the forgotten smoke call on that first loop, produced the shot that made all this worth the effort. The smoke, in fact, became a bit of a problem without the usual Rainier summit gale to clear the air between loops. We had to waste some of our precious fuel orbiting, waiting for the stuff to dissipate. During one of the orbits, a Braniff captain on approach to Sea-Tac airport called to ask if it would be OK to take his passengers through one of the big smoke rings we had just left alongside the mountain top. As I said, the day was almost surreal.

I guess of all my shows and stunts, the nine-plane over Mount Rainier is the one I will always remember. We had never operated a tight formation at that altitude before, but I knew that the loop would have to be very large. This meant, of course, that we would have to carry more speed; yet, at high altitude we would have less thrust available to us. No question, it was going to be touch and go all the way!

Performing vertical manoeuvres in close formation with the Tutor at sea level requires a power setting in the mid to low 90's from the Lead. Over the top, this is reduced to the high 80's. At Mount Rainier, we used 99% in the descent to get enough speed on the airplanes to enter the loop, and then I reduced one-half percent over the top! How some of the guys stayed in, particularly 4 and 5, I'll never know. As it was, we floated the top at .5g and about 70 knots or so. On the back side we gingerly added g's to get the feeling back into the seat of our pants. I also remember that we used the mach meter (.65 mach) instead of the airspeed indicator. After the first loop was over, everyone breathed a sigh of relief, and we went on to do another six or seven.