It all began one day when Jonathan was fifteen years old, while on his way to go fishing with his Dad. At that time, all the small towns had tall grain elevators with the town's name written on their side. While driving down the road he noticed one with the name "Pearce" on it. This rang a bell with Jonathan, for he had read an article about how Lancaster bombers had been scrapped in this town after the war. So on the return trip from fishing, he talked his Dad into taking him out to the abandoned airfield where this had taken place. There he found pieces of the bombers still lying in the field. There were flaps, ailerons, access panels, and tires, still untouched. This intrigued Jonathan so much that he started researching these bombers.

Jon learned that during the late summer and fall of 1945, several dozens of Lancasters were flown to southern Alberta from Yarmouth, Nova Scotia to be stored in a drier climate. Cliff Black led a group of six that left Yarmouth on September 8th. He recalls that the former No. 2 Flying Instructor School at Pearce wasn't designed to handle aircraft such as the Lancaster. He was shocked to see the short runways as he over-flew the airfield. Fortunately there was a headwind as his group landed. Cliff touched down at the very end of the runway and managed to stop in time but a couple of his group did not and ran off the end of the runway.


In a nearby town (Nanton), a complete Lancaster was sitting next to the road. The town had saved it from being scrapped and did all they could to preserve the bomber. In Jonathan's quest to find out as much as he could about the cut-up bombers, he contacted the people who were in charge of maintaining the Lancaster. They told him that other Lancasters had been sold to farmers after the war and gave him the name of one.

Jon got in touch with this farmer and found that he had lots of Lancaster bits and pieces and he gave him the names of other people in the area that also had parts from the planes. The Lancaster became a favourite plane for Jonathan and he began to collect Lancaster parts as well as those of other aircraft. In 1982, he even contacted the Town of Nanton in an attempt to acquire their Lancaster. As he worked with members of the Nanton Lancaster Society a few years later, Jon was always somewhat embarrassed when he made mention of this.

In 1946 and 1947, the Canadian government had begun to sell off some of their inventory of aircraft to local farmers. At a former training base near Jon's home in Lethbridge, they sold nine Lancasters along with eleven P-40 fighter aircraft. The price for a Lancaster was $350! Most of the farmers who bought the bombers felt that they got their money back after using the fuel that was in the aircraft's six wing tanks. 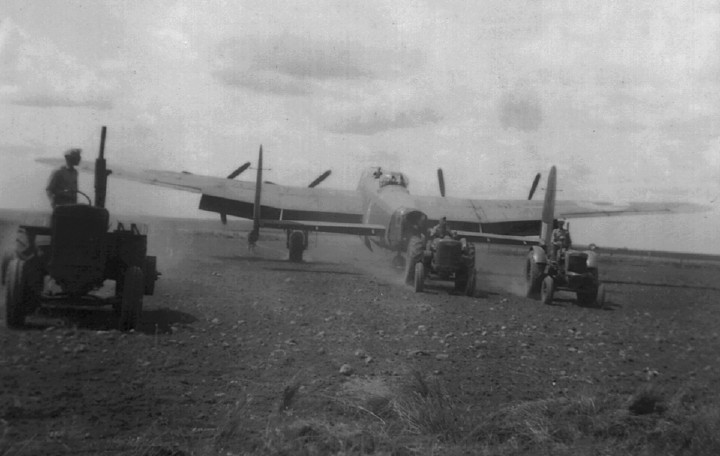 Farmers heading home with their bomber.


Jon was always fascinated with how the various parts were put to many and varied uses on the farm as the Lancaster became the farmer's "hardware store." As well as the fuel, there was engine and hydraulic oil and hydraulic cylinders that could be adapted to various uses around the farm. The aircraft also provided a seemingly endless supply of wire, metal tubes, and sheet aluminum. Some of the more novel ideas were placing Lancaster tail wheels on threshing machines, using crew door ladders for checking the level in grain bins, placing bomb-bay doors as borders of flower gardens, using propeller spinners as plant pots, and incorporating escape hatches (with windows) into the construction of outhouses in order to brighten their interiors. Eventually the farmers were approached by companies who purchased the aircraft from them and melted them down for their aluminum. However, many non-aluminum parts remained on the farms. 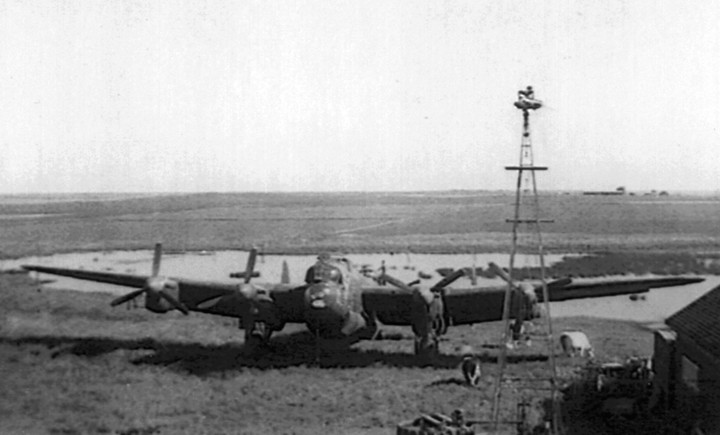 Lancaster on the farm.


Jon took his airplane hunting seriously, documenting his work in a detailed book that listed the locations of the farms where the aircraft had been broken up, the specific identification and wartime history of the bomber, and other information about them. Jonathan eventually found a complete Lancaster fuselage. It was always his dream to have one but once he found it, he realized that the project was going to be way too big for him. It was offered to him for $1500 but he had to turn it down.

While in his last year of high school, Jonathan began to ask around at junkyards to see if they had airplane parts. He found one man who had purchased fifteen B-24 Liberators. Twelve of the bombers had been scrapped right away. The junk dealer had kept three for himself as souvenirs, but they fell prey to vandals and this prompted him to melt down the remaining three. But before he did, he stripped the planes of all their hardware. No one knew of this until Jon came along and found that everything was still there. This was a major break and soon he found himself in the vintage aircraft parts business.

Jonathan's first purchase was a tail turret for which he paid $100. He then sold it for $500 and thought he had made a killing. Later he found out that its new owner had sold it for $5000. Jonathan learned quickly.

The airplane hunting continued, often with his friend Richard de Boer with whom Jon shared the knowledge and the same inner love for the old warbirds. He also encouraged and worked with the fledgling Nanton Lancaster Society. Jon's restoration of the bomber's pilot's instrument panel was the first step in the restoration of Lancaster FM-159 and provided significant momentum to the Society's efforts to preserve and restore Nanton's bomber.

Lancaster pilot's instrument panel restored by Jonathan Spinks.
(The panel is now in the aircraft. Parts of it are 'live' during engine run-ups.)


Following the completion of a history degree at the University of Lethbridge, Jon moved to England where he studied law. He continued to help the Nanton Lancaster Society by attending "aerojumbles" on our behalf and purchasing badly needed parts.

"Aerojumbles" attract a variety of collectors and enthusiasts and while at one of these Jon overheard a gentleman mention that he had three or four perspex domes from Lancaster mid-upper gun turrets. He had used them to grow tomatoes in. Eventually Jon arranged for the museum to acquire these rare parts.