Joe trained at No. 12 EFTS at Goderich, Ontario flying Fleet Finch aircraft. He was then assigned to No. 5 SFTS at Brantford, Ontario where he trained on Avro Ansons. One day during his training he had his map fly out a window and Joe became utterly lost. With fuel running low he had to land in a farmer's field to ask directions. Despite this, he received his wings and a commission on 17 December, 1941. Most of the sixty or so graduates became pilots with Bomber Command. Most, including Joe's friend Don Curtain, would not return from Europe. 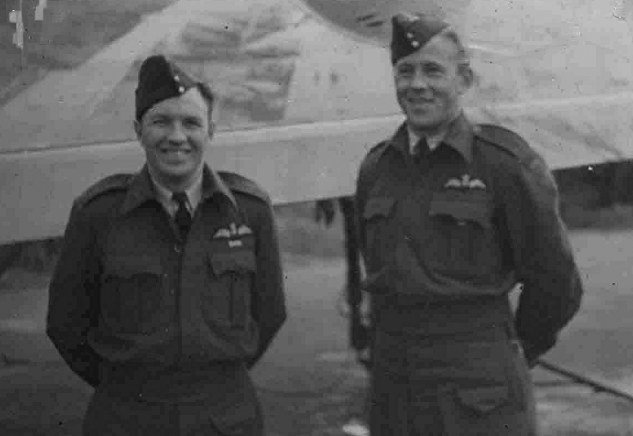 Joe McCarthy (right) with his good friend Don Curtin two days after Don had been awarded the DFC in the fall of 1942.
Sadly, F/L Donald Joe Curtin DFC and Bar was lost on a raid to Nuremberg on 25 February, 1943.

Following Christmas, McCarthy sailed from Halifax for England aboard a banana boat. The ship was separated from their convoy during bad weather and proceeded alone for eleven days before docking in Liverpool. When McCarthy and his fellow aircrew arrived at Bournemounth they were surprised that they had arrived before the rest of the convoy.

Following further training on Oxfords at No. 12 Advanced Flying Unit, P/O McCarthy completed his training at No. 14 Operational Training Unit. During his "training" with the O.T.U. he flew three operations to the Ruhr in the twin-engined Hampden bomber. On 11 September, 1942 he was assigned to No. 97 Squadron RAF at Woodhall Spa in Lincolnshire and began flying operations against the enemy. He was highly regarded on the squadron and awarded the Distinguished Flying Cross, the citation reading, "On many occasions this officer has attacked targets in Germany. As captain of aircraft he has participated in sorties to the heavily defended objectives in the Ruhr and took part in the successful raid on Essen on a night in March 1943. He has also attacked Berlin three times and Italian targets on five occasions. Throughout his whole career, his conduct has set an example of high courage and efficiency to other members of the squadron".

While with No. 97 Squadron, Joe had met W/C Gibson who was stationed at nearby Coningsby. As Joe was completing his tour he received a telephone call from Gibson who told him, "I'm forming a new squadron. I can't tell you much about it except that we may be doing only one trip. I'd like you and your crew to join us."

Joe was excited about the opportunity but his crew were a bit cool. They had just beaten the odds and competed a tour of operations. However all but one of the crew decided to follow their captain to the new squadron. They made their first flight with the new squadron on 31 March, 1943.

After several weeks of intensive and dangerous low-level training, Joe very nearly was unable to participate in the raid itself. When he and his crew entered their aircraft "Q for Queenie" they found that the Lancaster could not be flown because of leaks in an engine's coolant system.

Joe and his crew then rushed over to "T for Tom", the spare Lancaster, only to find it virtually unserviceable too since the card giving the compass deviations vital for accurately flying the carefully charted route to the dams was not in the cockpit. The chances of navigating through the enemy anti-aircraft sites to their target were zero without it.

Again Joe left the cockpit, this time headed in a rage for the hangar where he was met by Flight Sergeant "Chiefy" Powell, the squadron's senior NCO. Fortunately, he was able to locate the missing compass deviations card.

Finally Joe was airborne but he had taken off twenty minutes after the rest of his section. He was the commander of the squadron's second wave that was assigned to attack the third of the three priority dams targeted. This was the Sorpe dam which, unlike the Mohne and Eder dams, was built of earth covering a concrete core which would absorb more of the shock waves created by the bomb and reduce its intended effect. For this target the "bouncing-bomb" mode of attack was not used.

Joe was the only one of his five plane wave to reach the Sorpe. Of the four other aircraft, one was shot down and another was so badly shot up by flak that it had to abort. Another crashed into an electrical pylon supporting power cables and the fourth had to abort because it was flying so low that it bounced off the water and lost its bomb.

The target was located between high hills that necessitated a steep dive from the attacking aircraft and, to complicate matters further, a thick mist filled the valley making it difficult to locate the dam.

When at last the dam was identified Joe made his bombing run along the crest of the 2297' dam wall. The Sorpe, because of it's earthen construction, had no vertical wall to stop the skipping mine and hence had to be attacked by flying parallel to the dam and not at right angles to it as with the Mohne and Eder. This necessitated coming over the top of the hill and closely following the slope down to the dam, using flaps to keep speed under control, dropping the mine and then climbing out quickly as the hill rose on the other end of the dam. It was not until the tenth run over the dam that bomb-aimer Sgt. George "Johnny" Johnson was satisfied and released the bomb from a height of about thirty feet. The explosion sent a huge tower of water into the sky but when Joe flew over again he could see that the wall had survived although the parapet had been damaged.

Although the Sorpe Dam wasn't breached as were the Mohne and Eder, the crest of the dam had crumbled for 50 yards and eventually the Germans were forced to draw off some of the capacity of the Sorpe Reservoir. Canadian pilot Ken Brown flew the only other aircraft that attacked the Sorpe.

F/L McCarthy was awarded the Distinguished Service Order for his efforts on the Dams Raid.

Joe was also involved in the dropping of the first 12,000 pound "Tallboy" bomb on the Saumar railway tunnel. The weapon was released from 10,500 feet and struck within 100 yards of the target, causing the tunnel to collapse. Joe dropped other Tallboys on submarine pens and a V-1 factory where he spent fifty minutes over the target. His 67th and last operation took place on 4 July, 1944 when he placed a Tallboy on a target near Criel, France.

During his war time career with No. 617 Squadron, Joe's aircraft featured a unique collection of nose art that was related to his American, Canadian, and British connections.

Following a brief period with No. 6 Group Headquarters and another as the commanding officer of a fighter affiliation unit where he flew Hurricanes and Sptifires, S/L McCarthy was posted to the Royal Aircraft Establishment at Farnborough in November, 1944.

Following the end of the war, McCarthy continued at Farnborough where he served with the "Foreign Aircraft Flight". This group had the task of locating a wide range of Luftwaffe aircraft types, ferrying them to England, and evaluating them. Some 75 ex-Luftwaffe aircraft were flown to Farnborough and approximately 50 others were delivered by sea. Joe flew numerous types including the FW-200 Condor long range anti-shipping aircraft, the big Arado 232 transport, the FW-190 fighter, the He-219 Owl, Germany's most advanced night-fighter, and the Do-335, Germany's most advanced piston-powered aircraft of the war. It had two DB-603 engines each with 2100 horsepower. One was mounted in the nose and the second in the tail. Joe also flew his first jet, the British Meteor EE-360. When his duties at Farnborough came to a close at the end of 1945, S/L McCarthy had flown fifty different types of aircraft.

Joe McCarthy remained in the RCAF and took out Canadian citizenship upon his return to Canada in 1946. He enjoying a varied and successful post-war career that included commanding the Test and Development Establishment at Rockcliffe, Ontario, serving as Wing Commander Flying with No. 4 Flying Training School at Penhold, Alberta, commanding No. 407 Maritime Reconnaissance Squadron at Comox, British Columbia, and acting as the air operations officer for the United Nations for fourteen months in the Belgian Congo in 1962. In 1966 he became Base Operations Officer at Greenwood at the height of the Argus anti-submarine activity. His last trip in the RCAF was aboard an Argus on April 9, 1968.

Following his retirement he moved to Virginia Beach, Virginia, working in real estate for a few years before retiring. During retirement he lectured at the USAF Air War College at Maxwell Air Force Base.

During the war, Joe McCarthy is said to have been a favourite of his fellow pilots. He was 6' 3" and weighed 225 pounds, becoming known on the RAF squadrons as "the big blond American". According to Harry Humphries, No. 617 Squadron adjutant, "He was a massive hunk of man physically, but really a gentle giant."

Outwardly, he had a personality that matched his physique. His colourful American expletives, freely lavished on all who crossed his path, were in marked contrast to the more austere profanity of the British pilots. But as the end of the war approached, he had adapted somewhat to the British way, being seen with a pipe, a walking stick and a dog on a leash. "If I'm going to be an officer and a gentleman," he said, "I'm going to have a crack at looking the part."

McCarthy hated bureaucracy and anything from ground staff that he interpreted as a lack of appreciation of the risks that the aircrew took almost every night. Prior to a second attempt by No. 617 Squadron to breach the Dortmund-Ems canal, he over-heard a WAAF officer remarking, "My God, I hope they get there tonight. The trouble the AOC's gone to over this." McCarthy silenced her with a snarled, "The hell with you and all the AOC's. What about the seven lives in every kite!" and stormed off. On this second attempt, only three out of eight aircraft made it home. 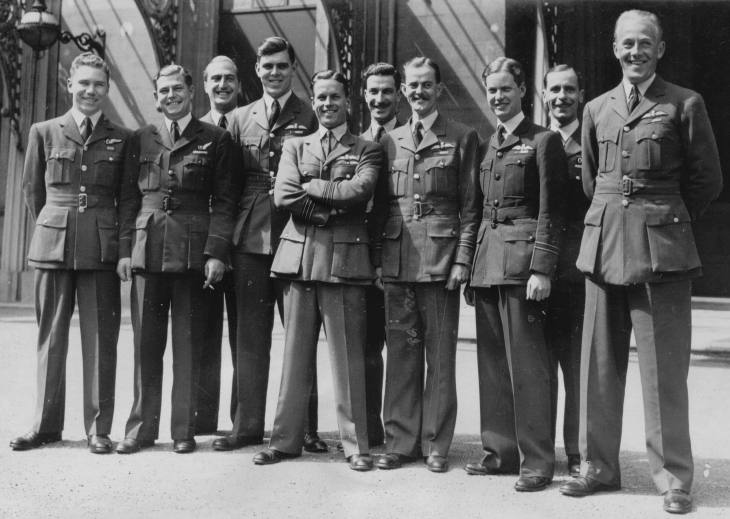