The following article was first published in the 'Journal of Commerce' 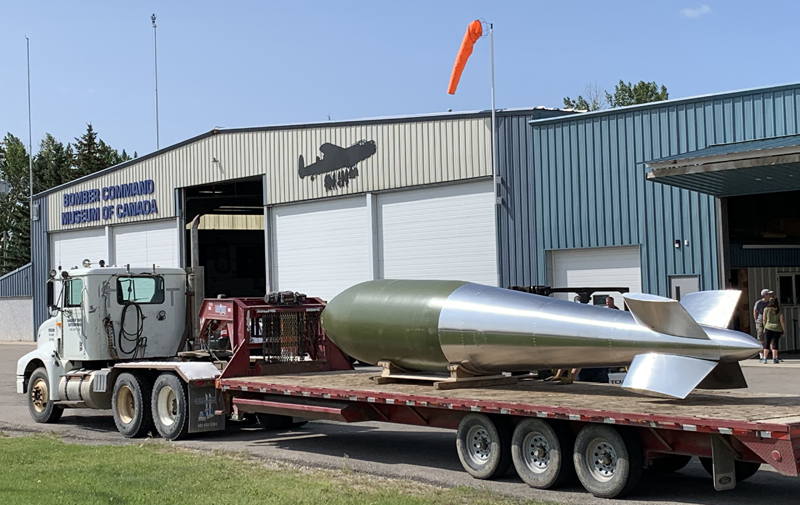 Arriving at the museum.


The Bomber Command Museum of Canada in Nanton, Alta. already has an Avro Lancaster FM-159 bomber and a replica of a 12,000-lb. Tallboy earthquake bomb among its extensive Second World War historical collection. But the museum also had its sights set on a replica of the Grand Slam, the most powerful conventional bomb used during the war. It recently turned to two local woodworkers to make it happen.

The original Grand Slam was built with a hull of five-inch thick manganese steel designed to allow the bomb to fully penetrate enemy infrastructure, including submarine pens and bridges, before detonating. It weighed 22,400 lbs. and measured 26 feet long and 46 inches in diameter at its widest point.

Museum researcher Dave Birrell notes that museum's interest in the Grand Slam was heightened by its Canadian connection. Air Commodore John Fauquier was Canada's most decorated airman and its leading bomber pilot during World War II. He led the famous Dambusters squadron that dropped Grand Slams and other bombs on enemy infrastructure. Fauquier was the first pilot to take off and land with the massive bomb on board. Typically taking off at 110 miles per hour, the heavily loaded Lancaster couldn't leave the ground until it reached 145, wings bending with the strain.

Andy Lockhart and John Morel are known for crafting intricate wood furnishings, with the occasional foray into Second World War-era aircraft exhibits. Lockhart bills himself as a "serious amateur" but had already restored the museum's Lancaster navigator table. Five years ago, the pair joined forces to build the replica of the Tallboy now on display.


The nose was then coated with fibreglass and painted to match the original.