Downham Market is a small market town adjacent to "The Fens" in Norfolk, England. The Great Ouse river, together with a large "relief channel" that parallels it, pass just to the west of the town near the railway station, taking water removed from this reclaimed area to the sea at "The Wash." Much of Downham Market is little changed since World War II when the airmen based at the RAF station two kilometers east of the town-centre would have arrived by rail. Ian Bazalgette VC was one of these airmen, being posted to No. 635 Squadron at RAF Downham Market on 5 May, 1944.

As we passed through the station in May 2008, we noted that the old, at least by Canadian standards, station is well maintained and features the unique rockwork characteristic of Norfolk buildings. 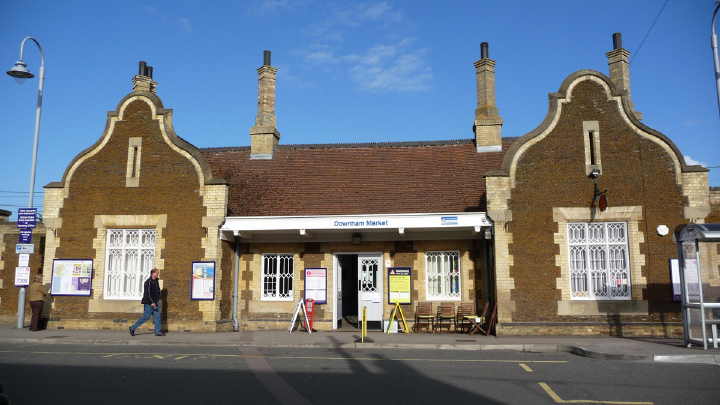 A winding road leads up the gentle hill to the town centre, a fresh coat of asphalt being one of the few changes from the days when Baz and his crew would have used it to reach the airfield. Mrs. Plumb operates the B&B at which we were staying at the bottom of the hill and she recommended "The Crown" for supper. We climbed the hill, reaching the pub at the town centre and located the un-marked entrance to the pub a short distance along a "carriageway" that left the main road through a stone gate.


The following morning we were met by Elizabeth Howard, a local resident with a particular interest in the history of RAF Downham Market and the small church that adjoins the former station. Elizabeth drove us through the town and into the farmland to the east. As the road crossed the A-10 highway and became the B-1122, Elizabeth pointed out that the section of the A-10 to the north was built on one of the station's runways. After driving another kilometre to the east, we arrived at a Memorial near the entrance to Bexwell Church. The Memorial contains three brass plaques, one referring to the station itself. 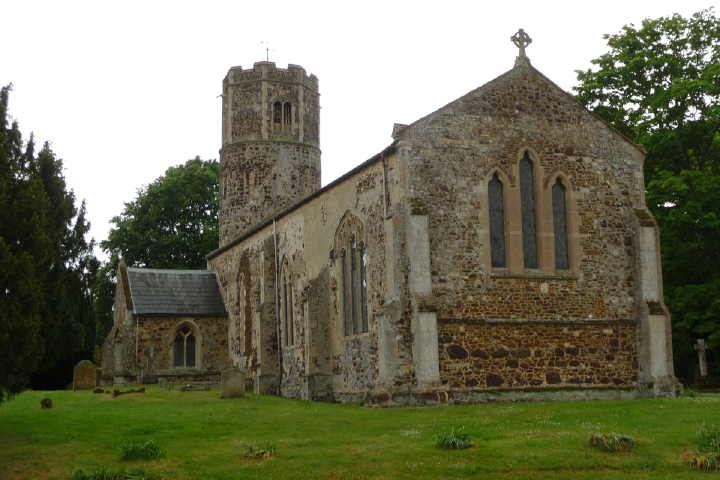 
To the north of the church, across the A1122, were the remains of the station -abandoned since 1946. As mentioned, one of the runways formed the basis of the A-10 highway but only traces of others may be seen today on Google Earth (52° 36' 33.11" N; 0° 24' 31.17" E -note the former base buildings immediately south of this point, Bexwell Church farther south across the A-1122, and the town of Downham Market to the west). However portions of the tarmac remain, as well as sidewalks and the minor roads that connected the various buildings on the station. It was raining lightly as we walked amongst the remaining buildings, surrounded by bushes and overgrown with vines. We entered one or two, including one with a large fireplace. Was this the Officers' Mess, another spot where Baz, his crew, and other airmen sang the classic air force songs, beer in hand? Elizabeth told us that she expected the property to be sold soon, the buildings to be torn down and replaced by a housing development. 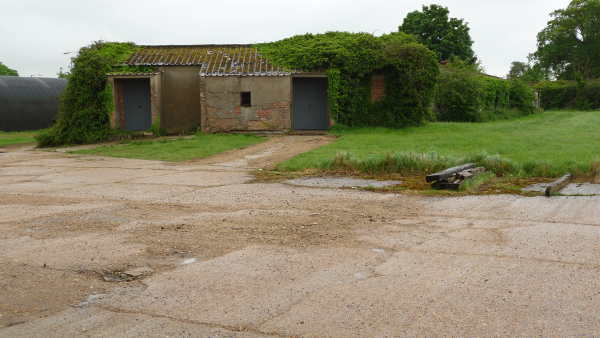 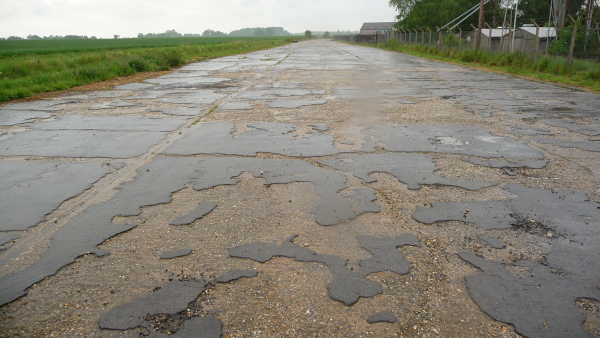 Portion of tarmac at Downham Market.

As we walked along the tarmac, we visualized Baz and crew, parachutes in hand, climbing into the truck during the morning of 4 August, 1944 to be taken to the dispersal where Lancaster F2-T awaited. Three and a half hours later F2-T would be in flames with only the port-outer engine operating. Four of Baz's crewmembers abandoned the aircraft as it approached the French village of Senantes.

Philippe Uziel, a member of the Bomber Command Museum, lives in central Paris. A few months earlier, together with his wife Françoise and son Guillaume, Philippe had visited Senantes and met Siméon Desloges who, as a nine year old boy, had watched Lancaster F2-T fly over his father's farm, just north of Senantes. Siméon is also a member of the local veterans association. Arrangements had been made for us to meet with Siméon and ask him what he could recall seeing during the final minutes of the Victoria Cross flight.


We drove about 3/4 of a kilometre north of Senantes, stopping at a roadside Memorial next to the field where Baz landed F2-T. Philippe then drove another 3/4 kilometres and entered the yard of the farm where Siméon Desloges has lived all his life. Siméon and his wife welcomed us and, after exchanging pleasantries, I asked him what he saw on 4 August, 1944.

Siméon told us how he had seen the Lancaster flying west over Senantes and parachutes being deployed. He then drew a line on our map, indicating how the aircraft had made a 180 degree turn, flew to the east and then to the north before turning west again, flying very low and directly over Siméon's farm yard. It then turned south and landed in a field only 750 metres to the south. He recalled that his brother had thought it was the end of the world as the blazing aircraft flew over. Then he heard the huge explosion when the Lancaster blew up and subsequent explosions as oxygen bottles and ammunition detonated.

We know that Baz's starboard wing had been on fire for about fifteen minutes and that the port-outer engine was the only one still running when they reached the Senantes area. I asked Siméon if he remembered the amount of fire and smoke that was trailing the aircraft. He answered by saying that there was very little smoke but lots of fire trailing from the starboard wing. 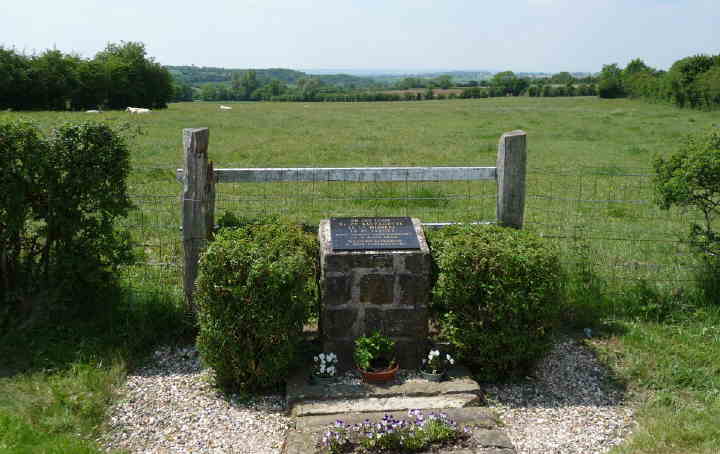