Thomas Fetherston
- A Name in the Sand 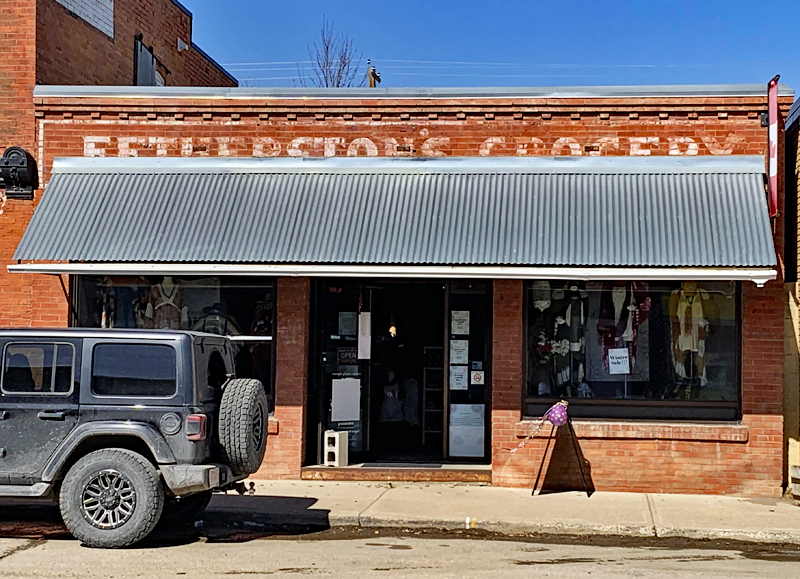 The former Fetherston Grocery building in Nanton as seen in 2021.

A Name in the Sand
by Gerlof Molenaar

On a Sunday morning in April 1999, Henk de Jong (my wife's uncle) was walking on the beach of Ameland, Holland, between Nes and Ballum. At one point his attention was drawn to a bracelet covered with rust. It probably ended up on the beach during the most recent sand replenishment. At home, he cleaned the bracelet. A name became visible, T.R.N. Fetherston and registration R.92966. Then he came to me and asked if I could find more information about the name on the bracelet.

The first thing I did was to search on the website of the Commonwealth War Graves. I found out that Fetherston was from 102 Squadron and was reported missing in action on November 9, 1942. We found out that he was crew member on a four-engined bomber of the type Halifax II with the registration W864, DY-F. The target was Hamburg.

The RAF carried out an attack on Hamburg in which 213 aircraft took part, 74 Wellingtons, 72 Lancasters, 48 Halifaxes and 19 Stirlings. The forecast for that evening was overcast with strong northwesterly winds. But during the flight the weather was worse than predicted, a thick layer of clouds, ice on the plane, and a lot more wind than predicted. Besides the poor weather, the assault force was also attacked by German fighters and flak. There were fifteen aircraft lost, namely five Lancasters, four Stirlings, four Wellingtons, and two Halifaxes.

With all this information, I contacted Klass van der Veen. I asked Klaas if he could help me to find relatives of T.R.N. Fetherston of Canada. Fetherston is not a very common name, so he started to call all the people with the name of Fetherston. This proved successful as he came in contact with a cousin of Thomas Fetherston. He told Klaas that Thomas's widow was still alive and that she had a daughter. When the widow, Helen, was informed that the bracelet from her late husband had been found on Ameland, it brought many emotions up. Though later remarried, Helen still thought that one day Thomas would stand suddenly before here. It was very difficult for her to believe that Thomas was dead.

Following a written request, the mayor of Ameland asked Helen and the daughter if it was possible for them to visit Ameland. Helen was not able to make the long journey because of health problems. But her daughter, Sharon, accepted the mayor's invitation. Sharon told us that she was eight months old when her father died. She unfortunately never knew her father. On July 12 2000, Sharon and her husband Preston arrived on Ameland. Sharon wanted to visit the place where the bracelet was found. She put her hands into the sea, and during that emotional moment she felt connected to him.

On July 14, the official handover was made on the beach at Ballum with great press interest. Sharon, who was very impressed, took the bracelet from the hands of Mayor Wilpstra. After the ceremony, Sharon said that her mother finally could close this chapter in her life.

At Sharon's request, a monument was placed in the cemetery at Nes. The monument was unveiled by Mayor Verhoeven on May 4 2001.