By the time war broke out, Johnny was a very experienced bush pilot and he enlisted on November 1, 1939. He took the flying instructors course at Camp Borden and Trenton. After a year of instructing he was posted overseas to No. 405 Squadron where he flew Wellingtons until April, 1942 when the squadron was re-equipped with Halifaxes. By August, 1942, Fauquier had completed his first tour of 35 operations and was awarded the DFC.

Fauquier was then posted to RCAF Overseas Headquarters, then promoted to Group Captain and sent to 6Group Headquarters. On March 1, 1943, he was made commanding officer of No. 405 Squadron which, after only a few weeks, was transferred from 6Group to 8Group, the Pathfinders. Fauquier acted as Assistant Master Bomber to Group Captain John Searby on the Peenemunde Raid against the German V1 and V2 Development facilities. On August 23/24, Fauquier was Master Bomber on the opening operation of the Battle of Berlin when he coordinated the attack by 727 aircraft. He continued as C/O of No. 405 Squadron until the end of his second tour in January, 1944 and returned to 6Group Headquarters.

After hearing that Bomber Command was looking for a replacement for Willie Tait as commanding officer of the elite No. 617 Squadron, Fauquier, who was now an Air Commodore, offered to have his rank reduced to Group Captain in order to accept the position. During December, 1944, he was back on operations as the new No. 617 C/O, a position he held until the end of the war. During the last months of the war and under Fauquier's command, No. 617 employed the 22,000 lb "Grand Slam" bombs. 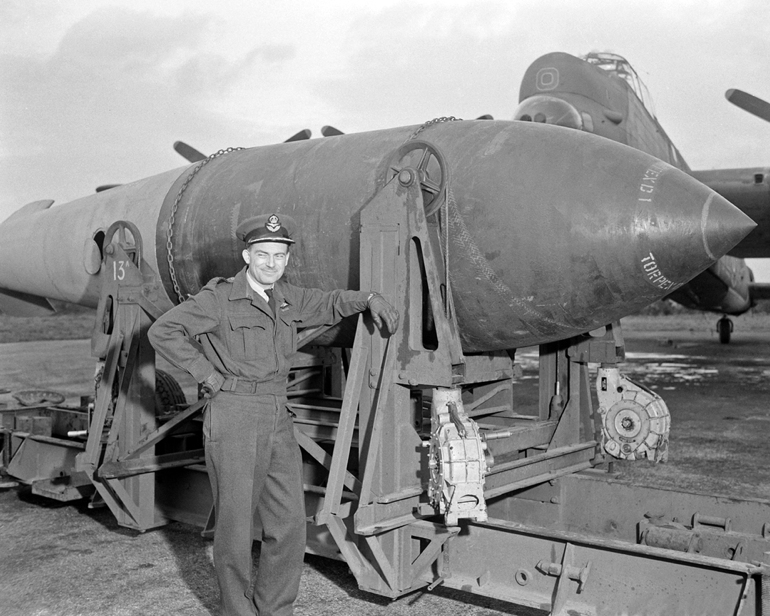 
Regarding Johnny Fauquier, Spencer Dunmore, author of a number of fiction and non-fiction books regarding the air war and Canada's role in it, wrote the following in his highly acclaimed book, "Above and Beyond."

The quotation is presented here with his permission and our appreciation.

He was aggressive and impatient, often brusque, sometimes downright rude, yet he could display considerable charm when it suited him. He flew an airplane superbly. And he got things done. Not for him the lighthearted approach of so many airmen, the breezy downplaying of danger, the casual assumption of risk. John Emilius Fauquier, destined to become Canada's leading bomber pilot, was under no delusions about the dangers of his profession, but he had total confidence in his skill and experience. Born in Ottawa of well-to-do parents, he learned to fly early in the thirties, becoming a successful bush pilot. On the outbreak of war, he volunteered. The Commonwealth Air Training Plan was being planned, and men with Fauquier's experience were in demand. Although impatient to get into combat, Fauquier bowed to the inevitable. He did a good job as an instructor and turned out pilots efficiently, although he could muster little enthusiasm for the job.

At last, in June 1941, Fauquier got his wish: a posting overseas. It was a time of mounting casualties among the bomber squadrons. (Bob Dale, who graduated as an observer in December 1940, recalled that of his group of 42 novice navigators who reported to the RAF depot at Uxbridge, near London, only four survived their first tours.) Fauquier joined 405 Squadron at Driffield, Yorkshire, flying his first operation, to Emden, on Germany's northwest coast, in October 1941. Resourceful, totally dedicated to the task of getting the bombs on the target, he seemed to have been born for the job. Like Guy Gibson, he derived intense satisfaction from taking on the formidable odds of ops, and beating them time and again. His unique qualities brought him rapid promotion. In January 1942, he became a flight commander on 405; a month later he became CO, replacing Wing Commander Fenwick-Wilson, of Rock Creek, British Columbia, who had been in command since the previous August. It was a meteoric rise. Soon the name Fauquier was becoming well known in Bomber Command circles.

To his squadron-mates, Fauquier appeared to be a totally fearless individual who flew into danger without hesitation, never concerning himself about the risks -"dapper, cool-faced, steely-eyed as a swordsman," the Star Weekly called him. Fauquier must have squirmed. He himself always maintained that a man without fear was a man without imagination. The trick was to keep fear under control, and this Fauquier did supremely well. The complete professional, he saw survival in his dangerous profession as a matter of percentages: crew teamwork counted for so much, constant vigilance for so much, intercom discipline for so much, and so on. He knew there was nothing absolute about it: a lucky 88 -mm flak shell could make it all count for nothing. Perhaps that was the spice, the flavour that proved irresistible to a man of his nature.

Like many individuals of powerful character, Fauquier was usually referred to by his surname only. There was only one Fauquier. Some hated him because he seemed unaffected by casualties -"tough break" was all he would say when an aircraft failed to return. Realist that he was, he knew there would be casualties, so what was to be gained by overreacting? When things went wrong, Fauquier's gaze froze, "and it looked as if it could penetrate solid steel," according to Lucien Thomas, an air gunner in 405 Squadron during the Fauquier era. Every op was a maximum effort as far as he was concerned, and no allowances were made. A totally inexperienced crew arrived on the base and the next day went off to Schweinfurt, fifty miles northwest of Nuremberg, on Fauquier's orders. The navigator of the crew, Allan Turton of Ottawa, recalls being shot down because, "typical of sprog crews, we were flying straight and level at 22,000 feet in an avenue of fighter flares." A German night-fighter fired his cannon into the Halifax's belly and, says Turton, "blew the middle out of the aircraft." Five of the crew escaped, two died.

There is not doubt that Fauquier drove his crews hard, invariably dissatisfied with their performance. They could always have done better, in his opinion. Edith Kup, a WAAF intelligence officer at Pocklington, East Yorkshire, one of the squadron's bases, remembers a harried -and inebriated -aircrew officer threatening to shoot Fauquier. He wasn't going to put up with any more of the CO's brow-beating, he declared, producing a service revolver in an unsteady hand. Fortunately for the war effort, he didn't carry out his threat.

There is no doubt that Fauquier was one of the toughest of commanders. He saw his job as getting every available aircraft on the target on every night of operations and had no patience with any incompetence or inefficiency that might compromise that goal. Although well read, he was no sophisticate. Edith Kum remembers him eating the flowers on his table at dinner at the Royal Station Hotel after a few drinks. Many of his airmen found his language salty, his manner crudely abrasive. The ground crews thought the world of him, because he thought the world of them and never took them for granted, always remembering to take them bottles of beer or other treats if they had worked particularly hard. Many considered him Canada's greatest bomber pilot.

Throughout the many sorties in which he has participated this officer has displayed the highest quality of courage and leadership. His ability and grim determination to inflict the maximum damage on the enemy have won the admiration of the squadron he commands. Wing Commander Fauquier took part in the two raids on Essen when a thousand of our aircraft operated each time. He is an exceptional leader.

This officer is a first-class leader whose skilful and courageous example has proved most inspiring. His sterling qualities were well illustrated during an operation against Peenemunde one night in August 1943, and again a few nights later in an attack against Berlin. Wing Commander Fauquier has displayed boundless energy and great drive and has contributed, in a large measure, to the high standard of operational efficiency of the squadron (No. 405) he commands.

This officer has commanded the squadron (No. 405) with notable success during the past nine months. He has frequently taken part in sorties against distant and well defended targets including several attacks on the German capital. He is a forceful and gallant leader whose outstanding ability and unswerving devotion to duty have been reflected in the fine operational work performed by the whole squadron. Group Captain Fauquier has set an example of the highest order.

Since assuming command of the squadron (No. 617) in December 1944, this officer has taken part in almost all the sorties to which the formation has been committed. Early in February 1945, Group Captain Fauquier led the squadron in an attack on the U-Boat pens at Poortershaven. Photographs obtained showed that the bombing was accurate and concentrated. Since then, this officer has participated in a number of sorties during which the railway viaduct at Bielefeld, a railway bridge over the river Weser and a viaduct over a flooded meadow near to Ardbergen bridge were all rendered unusable by the enemy. By his brilliant leadership, undoubted skill and iron determination, this officer played a good part in the successes obtained. He has rendered much loyal and valuable service.