This article was first published in the July, 2003 issue of "Airlines," WestJet's In-Flight magazine.
It was donated to the Society by the author, a freelance writer who resides in Nanton, Alberta.

A Dambuster's Daughter
by Tamara Vineberg


Shere Lowe has fond memories of her father, but sadly he died flying a float plane near Saltery Bay, British Columbia when she was six-years-old. She went on to follow her father's love of flying by becoming a flight attendant. But it wasn't until she joined the staff of WestJet that she discovered her father's true heroism with his role of the 1943 Dambusters Raid.

The Dambusters Raid was hailed as a miracle at the time when the Allies needed a boost in a losing battle against the Germans during World War II. Lowe's father, John Fraser, was one of 30 Canadians to join the highly secret mission to attack the hydroelectric dams of the Ruhr Valley.

"Operation Chastise, the daring night attack on the great dams of western Germany, was one of the most brilliant air attacks of the Second World War. Highly experienced crews had to face the danger of flying at night in heavy Lancaster bombers at 60 feet over water and what made it so dangerous at ground level were high tension wires and all kinds of obstacles," says Lowe. "There was no room for error in flying because if you dropped a wing at 60 feet, it would be on the ground."

Lowe only discovered the history behind the raid when she mentioned that her father was a Dambuster to a few WestJet pilots. They encouraged her to learn more about Fraser's role in the Royal Air Force No. 617 Squadron, which was formed specifically for the attack. Another flight attendant, who is a native of England, placed a 1982 book by John Sweetman called The Dambusters Raid in her mailbox. Inside, all the places where her father is mentioned had been highlighted. Lowe had no idea that the name "John Fraser" was so highly regarded.

"My father was such a modest man," she says.

She began researching the Dambusters Raid through the Internet and was contacted by the Nanton Lancaster Society and Air Museum in November 2002. Society director Dave Birrell notified Lowe about the museum's plans for the 60th anniversary of the raid in August and asked for any memorabilia that her family kept after Fraser's death.

Lowe approached her mother, Doris Fraser, about the Dambusters and a flood of information about her father was revealed for the first time in 40 years.

"Once dad was killed, she put everything away," she says. Newspaper clippings, her father's 140 wartime letters, and a letter from Guy Gibson, the commanding officer of the No. 617 Squadron, were brought out and Lowe began piecing the story of the Dams Raid and her father's involvement together.

In March 1943, Gibson was ordered to form a new, special squadron and chose the best crews and pilots to fly the 19 modified Lancasters. Fraser was a Royal Canadian Air Force bomb-aimer from Nanaimo and before the mission, Gibson gave him permission to leave the base in Scampton to marry Doris on April 29. He did not see his wife again until May 1945.

The Lancasters set out on May 16 for the attack, only eight weeks after the squadron was formed. Fraser was on the crew of John Hopgood and it was his main responsibility to take command of the bombing run and direct Hopgood to the target for an accurate release of the bomb. Lying on his chest in the nose of the aircraft, Fraser was also responsible for job pointing out high-tension lines and other hazards to the pilot, Hopgood.

Five Lancasters were lost on route to the dams; however, Gibson remained focused, leading the squadron to the first target, the Mohne Dam. But Hopgood's plane was attacked an hour before reaching the Mohne. The rear gunner, the wireless operator, the front gunner and the flight engineer all sustained injuries, yet Hopgood pressed on, despite sustaining his own injuries to the head. His plane was the second to attack and did not have the advantage of surprise as Gibson did. Guns in the towers along the dam fired upon the plane, which burst into flames in the starboard wing and in one engine.

Fraser released the bomb, it cleared the dam wall, completely destroying the power station, which "blew up with a large sheet of flame," immediately causing power failure over the entire valley area.

"We flew on and the pilot gave the order to abandon the aircraft within about 25 seconds after we passed over the dam. I knelt facing forward over the escape hatch and I saw that the trees looked awful . . . close," recalled Fraser in historical papers from the museum. "I thought there was only one thing to do and that was to pull the rip cord and let the pilot chute go out first and then let it pull the chute out and me after it and that's what I did."

Hopgood sacrificed his life in order to maintain the necessary altitude so that some of the crew could escape. Fraser landed uninjured 1,500 feet from the wreckage of the Lancaster in a wheat field.

Lowe says her father's escape has never been published correctly and the current folklore is that he was immediately captured by the awaiting enemy at the crash site. But the truth of the event is that he managed to elude his opponents for 10 days as he walked 200 miles towards Holland, surviving on turnips and potatoes from farmers' fields. Fraser was caught only 30 miles from the border and sent to a prisoner of war camp.

"He was so exhausted and caught trying to walk past
one too many policemen near the border," says Lowe.

Her father was in solitary confinement for seven days, but his spirit remained unbroken. After intense interrogation, Fraser revealed some information on the raid; however, he refused to give details of the practice location and defiantly told his captors, "I'm proud of my part in the Dams attack!"

Fraser was in four different camps over two years, one of which was Stalag Luft 3 where he played a role in the Great Escape. He was one of the penguins who distributed sand from the escape tunnels by releasing it throughout the camp from bags in his trousers.

The Dambusters Raid was a great success, and resulted in the destruction of the Mohne and the Eder Dams and damaged the Sorpe Dam. Flooding caused bridges, rail lines and roads to be swept away.

When Fraser returned from the war, he told his wife that the Dambusters Raid was a suicide mission, says Lowe. But he never forgot how Hopgood traded his life for other crew members and named his oldest son, John Hopgood, Shere after Hopgood's birthplace and his youngest son after Guy Gibson.

Since her discovery, Lowe, who lives in Surrey, British Columbia, has kept in touch with the Lancaster Air Museum in Nanton. Coincidentaly, WestJet is a huge supporter of Canadian aviation history and partially sponsored a trip for Birrell and president Dan Fox to attend an annual museum conference in Victoria last year.

"This whole connection with Shere and them (WestJet) supporting our conference and our museum is a neat little triangle," says Birrell who met Lowe and her mother during their visit to Nanton in March.

The August 16th event commemorating the Dambusters' anniversary had been planned long before Lowe connected with the museum. The society paid special tribute to Terry Taerum, who was born 70 kilometres northeast of Nanton and went on to become Gibson's navigator. He was killed in December 1943 during operations with the No. 617 Squadron.

As part of the event, the museum unveiled an addition to the Dambusters exhibit, which focuses on Fraser's compelling story.

Lowe's first trip to the Lancaster Air Museum was an emotional one. Her 79-year-old mother climbed into the pilot seat of the Lancaster and Lowe was able to visualize what her father experienced during the attack.

"Once I was able to climb inside it,
I could see how he managed to escape from the hatch," she says.

Her research on the Internet also linked Lowe with the Canadian No. 617 Squadron Association and she has met a surviving Dambuster who resides in Hamilton. Through this connection, Lowe and her mother were invited to attend the 60th anniversary reunion in England in May of this year.

During her eight-day trip, Lowe was overwhelmed by the hype and media attention that the Dambusters received. She and her mother had a touching reunion with Hopgood's two sisters.

"That was emotional and so rewarding.
We were able to take my father's story to them and tell them what my father saw.
They never knew what happened when the plane crashed," she says.

Photos of John Hopgood were taken out, and for the first time, Lowe had a clear picture of the man who saved her father's life.

The Dambusters reunion was held in Woodhall Spa at the Petwood Hotel, which was the old mess hall for the No. 617 Squadron. The squadron moved to the Petwood Hotel from Scampton after the Dams Raid so Fraser never set foot in the hall since he was a prisoner of war at the time.

Lowe says she was asked to play the Dambusters' March on her flute for the memorial service prior to the fly past of the Lancaster and the G-4 Tornados.

"The sun was shining, the birds were singing
and as I looked up to the sky just prior to playing my flute,
I reflected on how my father is my hero and a silent voice inside me said,
"This one is for you, Dad!""

During July, 2003 Lowe returned to Europe with her mother to visit the crash site and take a special 60th anniversary tour. An oak tree in memory of her father was planted in her mother's hometown of Doncaster, England.

At the "Dambusters -Sixtieth Anniversary Tribute" held at the Nanton Lancaster Air Museum in August, 2003, Doris Fraser presented the museum with a photo of her husband's squadron. Shere again played the Dambusters' March on her flute and her son, John, who is an air cadet, held the audience spellbound with a speech about his grandfather, John Fraser. 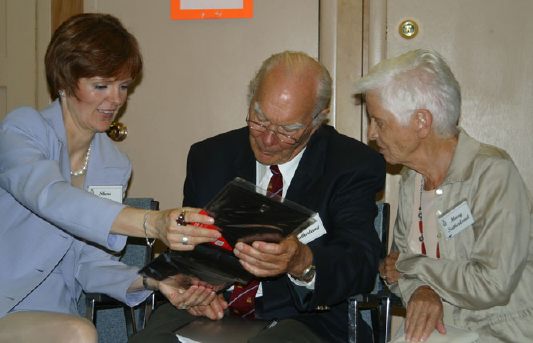