On April 24, 1945, in a barn located near Pernis, south of Rotterdam, Holland, High River's Ron Groeneveld, along with several other Dutch Resistance members, gathered around a radio to listen to an announcement that would change their lives forever. The British Broadcasting Corporation announced plans for bombers of the Royal Air Force to drop food supplies in an operation dubbed Operation Manna to the Dutch population in enemy-occupied territory.

Indeed the time was memorable for both the Dutch and the Bomber Command aircrew that played a part in Operation Manna. One of the most famous crew members was Nanton's Joe English. English was one of several crews of No. 625 Squadron that flew on the first day of Operation Manna.

English remembers being nervous as the trip was made in daylight and although the enemy troops had made a truce, it was always good to be prepared.

Looking down from the aircraft, English recalls people being everywhere and that he and his crew were very happy to be a part of this program and went so far to say, "It was the best raid of the war." 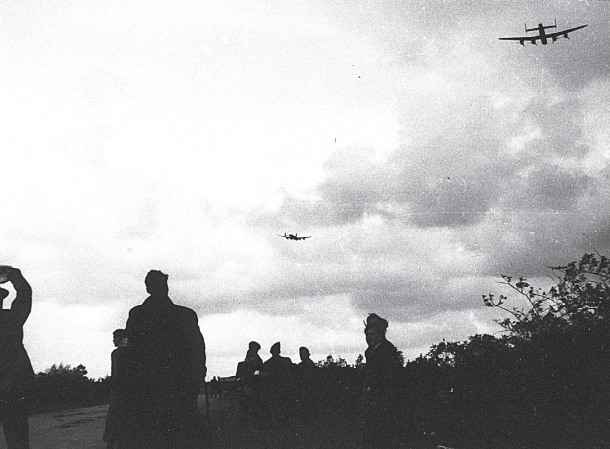 Airplanes skim over Holland in 1945 dropping food to a starving population.
A total of 3,100 flights were made by Bomber Command and more than 11,000 tons of food was dropped in 10 days.

The food supplies dropped by English and many other crews enabled people like Groeneveld to survive and tell their stories.

Groeneveld was only sixteen years old when he woke up in his farmhouse near Pernis to the noise of German airplanes flying over on May 10, 1940. One year later, the Germans began arresting the Jews and packing them in trains to be shipped off to concentration camps. Groeneveld remembers passing by a train station with two of his friends and being shocked at the horrific scene, which will be engrained in his mind forever.

"There were groups of Jews, tied to each other by ropes waiting for the right train to take them away," he told Birrell. "The SS was all over the place to watch if everybody behaved, and you'd better otherwise your life would be gone in a minute."

In the summer of 1942, Groeneveld was faced with a decision to work for the Germans in factories, which he knew were being bombed by the English air force, or to go underground. He chose the latter.

As a condition of joining the underground, Groeneveld was separated from his relatives. After six months of hiding out, Groeneveld missed his family terribly, and he tried to find a way to sneak back to his family farm. Luck was on his side and he made it safely home and soon his entire family set out to work for the safety and rights of the Dutch people.

Being a part of the Dutch Resistance meant a lot of secrecy and finding a great hiding place. Groeneveld set out to make a place in the family barn.

He told Birrell that he decided to make a room in the middle of the hay, which was warm, provided air and had an "invisible" entryway. It ended up being 10 feet by nine feet, which was enough room for five people. There was a bunk bed and three single beds with room for sleeping on the barn floor.

Word got out of Groeneveld's hiding place and soon people from the underground as well as spies, such as Wim Byl were asking to hide out there too.

Byl had been working for the Germans at an airport where he was able to collect a lot of information for the English. He did get caught, but was able to escape and asked for assistance from the Dutch Resistance who led them to Groeneveld.

Byl proved to be an integral member of the resistance, as he was able to make maps to send to England, which detailed where the Germans were fighting.

In early 1943, the Groeneveld family awoke to find a wagon loaded with rifles, bazookas, and enough ammunition to supply 25 men. The supplies had been dropped by Bomber Command and brought by a separate group of resistance members.

According to Bob Evans, curator of the Bomber Command Museum, hiding ammunition in carts was one of many variations of transport the Dutch Resistance used during the war.

"Guns were dropped to assist the underground in their goal to stop the Germans," said Evans. "Fields were designated to drop the weapons and spies were on the ground to make arrangements on both sides."

For two and a half years, Groeneveld spent every night in the hideout. During the day, he worked on the farm where food was scarce.

By 1944, the Dutch were unable to buy anything without food distribution stamps and the stamps they did get weren't enough to keep people alive. "Nearly 20,000 people starved to death," pointed out Evans. "I would say a lot of people survived because of those bombers."

Evans said people living in Holland's cities were hit harder by the food shortage than those living in the rural areas.

"Cities were in dire straits," he said.

Groeneveld said it's hard to describe what it was like to live in fear for so long and to see so many people go hungry. So, when on that fateful day in 1945 when Groeneveld and his family of Dutch Resistance members gathered in their hideout around their radio to hear the news that food was on its way, he breathed a sigh of relief and wished then that he could've talked to those bombers personally to say "thank you."

In 1954 Groeneveld immigrated to Canada and farmed near Blackie before retiring to High River.

In 1997, he decided to pay a visit to the Bomber Command Museum where his dream to thank the bombers was about to come true.

English was at the museum, and he confessed to Groeneveld that he had flown over Holland to drop bombs over Germany and said the best bombing he ever did was when he dropped food to starving people.

Groeneveld couldn't believe his luck. Once nations a part, the bomber and the resistance member were now living in the same country and only 27 kilometres away from each other.

"After 52 years, I was able to shake hands and say, 'thank you," he told Birrell.

English and Groeneveld have kept in touch and have become good friends over the years.

Groeneveld said he will never forget the "bomber boys" and because of them he said, "a lot of lives were saved." 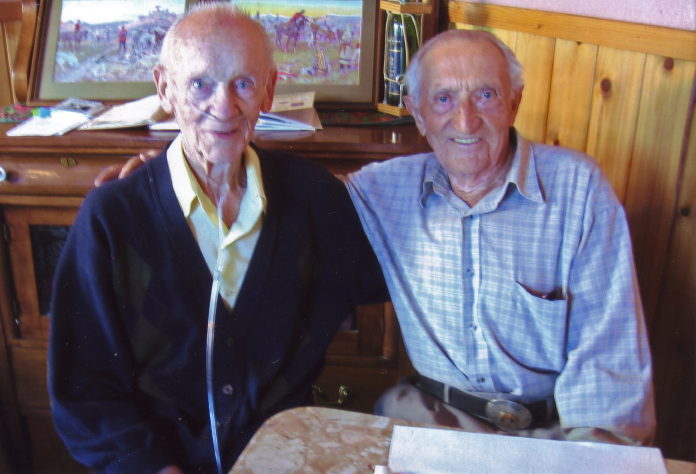 Ron Groeneveld, right, finally got to thank one of the Bomber Boys in 1997 when he met Nanton's Joe English.
English participated in Operation Manna, which saved thousands of Dutch people, such as Groeneveld from starving.