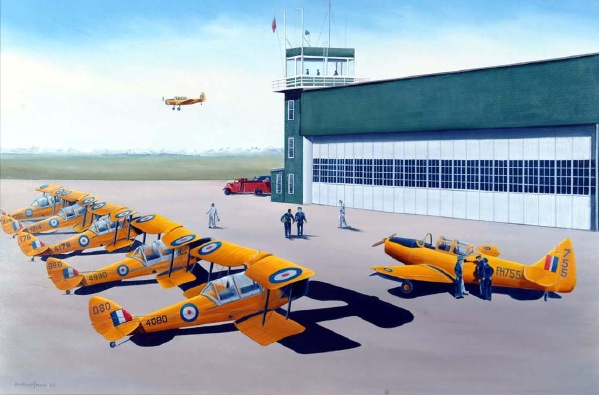 In October, 1942, the first two Fairchild Cornell trainers arrived at No. 5 Elementary Flying Training Station at High River, Alberta. Soon the school's De Havilland Tiger Moths were replaced by the more modern monoplane. Tiger Moth #1214 was flown by Gordon Jones during World War II and Gordon was still flying Tiger Moth #1214 when he was ninety years old. Tiger Moth #4176 was flown by Bruce Warren for this first solo and #4990 was flown by his twin, Douglas Warren, for his. #4080 was flown by Murray Peden for his first solo flight. Commissioned as part of the museum's "Salute to the BCATP" event, the painting was unveiled on 24 August, 2002 by Gordon Jones, former flying instructor at No. 5 EFTS.