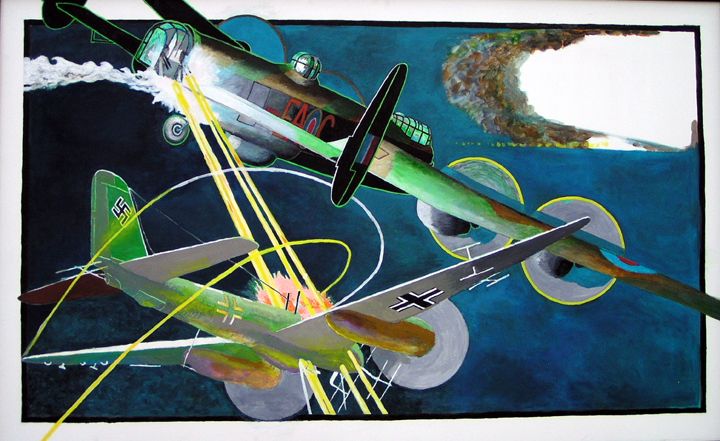 "THE JU-88 INCIDENT" -During a visit to the museum, David described how a Ju-88 nightfighter suddenly appeared below and to one side of the rear turret during one of his operations. As his pilot alternately banked left and right, the fighter would suddenly appear on one side and then reappear on the opposite side. David kept moving his guns to where the fighter was, only to have it disappear below the bomber before he could fire. He then decided to just hold the guns steady, aim down and to starboard and wait. When the fighter suddenly appeared directly in his sites, David's fire successfully struck the Ju-88. In his sketchbook, David referred to this painting as, "The Ju-88 Incident" and referred to "Hamburg" and the date November 11, 1944. His logbook notes, "Combat Ju-88," that the operation was, "Hot" and that he was flying Lancaster EA-C. The un-finished area was to be the target.