This was the official opening of a new British Commonwealth Air Training Plan display that has a special focus on No. 5 EFTS at High River. A model of the base was unveiled by members of Jock Palmer's family. Jock was one of the original instructors and went on to serve as Chief Flying Instructor and commanding officer. Our commissioned painting by John Rutherford depicts the arrival of the first two Cornells at the base in October, 1943.

Special guests included Ted Barris, author of "Behind the Glory," Gordon Jones, a former flight instructor at No. 5 who continues to fly his Tiger Moth, and Capt. Ray Hansford who is currently involved with the NATO Flight Training Program at Moose Jaw. 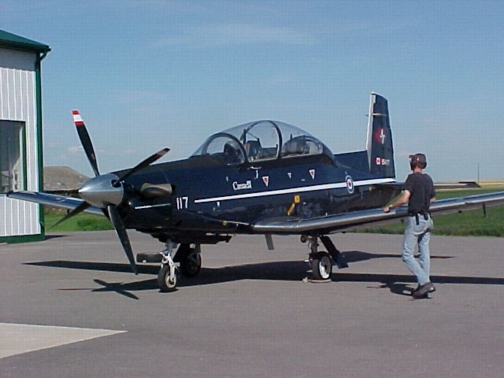 NLS Director Greg Morrison welcomes Capt. Hansford to our "Salute to the BCATP".
The Harvard II participated in the Flypast during the event.

"The First Cornells"
( Commisioned Painting for this Event )