With the growing numbers of the powerful four-engined Stirlings, Halifaxes, and finally Lancasters with their huge bomb capacity, great range and electronic navigational equipment the pattern changed. New tactics involving precise timing calculated to swamp defences plus the creation of a marker force, the Pathfinders, were formulated. The main force crews following behind were relieved of the responsibility of identifying the actual aiming point and the kind of success which had for so long eluded even the most skilful and determined crews became possible. On a raid to the Essen factories by 705 four-engined bombers ninety-six percent of the bombs were thought to have hit the factories. Bomber Command's attacks became what Hitler's armament minister, Albert Speer, called "the greatest battle that we lost."

For the British and for the occupied peoples alike, the bombers droning across the night skies were a symbol of hope as well as of growing might. Although primarily directed against the industrial capacity of Germany, Bomber Command was also prominent in the mining of enemy waters, the destruction of the majority of the huge barges Hitler expected would bring his invading armies to Britain, the "Dambusters" raid, the sinking of warships such as the battleship Tirpitz, D-Day invasion preparations, the destruction of the rocket laboratory at Peenemunde and the flying bomb launching and storage sites, and pin-point attacks on Gestapo headquarters.

The enemy mounted a massive effort to protect itself from Bomber Command and this, in turn, deprived their army and airforce of vital men and equipment. Seventy-five percent of their heavy anti-tank guns, manned by 900,000 soldiers, had to be used as anti-aircraft guns, scattered all over Germany because it could not be predicted where the bombers would strike next. Enemy factories had to concentrate on producing aircraft which were used in a defensive role. It is well known that scarcely a single enemy aircraft appeared during the Normandy Landings. Without the sustained attacks by Bomber Command on Hitler's war machine, D-Day would not have taken place in 1944 or, if it had been attempted, it might have been a costly failure.

For those who flew with Bomber Command, the following tribute was written by Sir Arthur Harris, Marshall of the Royal Air Force and the man ultimately responsible for sending them into battle, night after night, "There are no words with which I can do justice to the aircrew who fought under my command. There is no parallel in warfare to such courage and determination in the face of danger over so prolonged a period. . . it was, moreover, a clear and highly conscious courage, by which the risk was taken with calm forethought. . . it was, furthermore, the courage of the small hours, of men virtually alone, for at his battle-station the airman is virtually alone. It was the courage of men with long-drawn apprehensions of daily 'going over the top'. Such devotion must never be forgotten!" 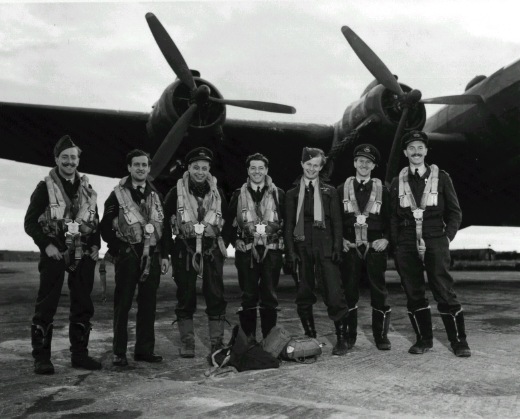