#2 AOS operated from August 5, 1940 until July 14, 1944 at what is now the Edmonton Municipal Airport. W.R. "Wop" May, a well-known Edmonton pilot, was appointed general manager of the school. Canadian Airways operated the school until 1942 when Canadian Pacific Airways took over. 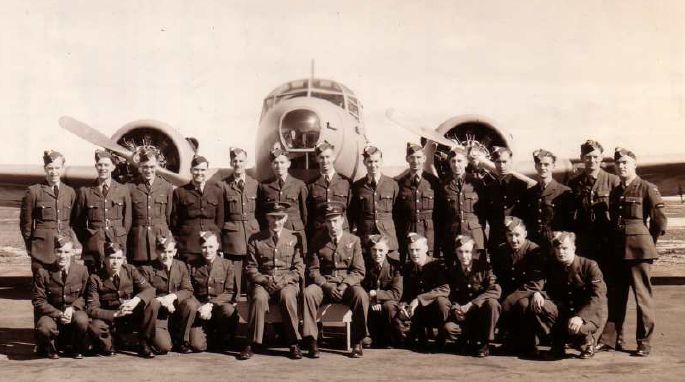 I never wanted to be anything other than a Navigator, so along with 22 others, I began my Navigator career at #2 AOS in Edmonton in Course 90. Each Course was in two halves, and prior to 90 one half had been Canadians, and the other half Commonwealth airmen, all of whom had enlisted to be pilots, but had washed out for some reason, and were re-mustered as potential navigators, or may have been sent to Bombing and Gunnery schools. With Course 90 the RCAF had changed the set up, and each half of the course was made up half Canadian, and half Commonwealth. No doubt some of the Canadians may also have washed out of pilot training, though I don't recall this ever being an issue. But the Commonwealth boys, particularly those from England, were quite bitter about being "downgraded" from potential Battle of Britain pilots to a lowly desk job.

My half of Course 90 had 3 from Vancouver, 1 from Thorold, 1 from Edmonton, 1 from Kelowna, 4 from Toronto, 1 from New Toronto, 1 from Fort William, and 1 from Peace River. The Commonwealth half had 1 from Coventry, 1 from Sydney, Australia, 1 from Huddersfield, 1 from Bristol, 1 from Durham, 1 from Shinaguarda, N. Rhodesia, 1 from Birmingham, 1 from Belfast, 1 from Leamington Spa, and 1 from County Durham. Course Commander was F/L W.J. Jones. I am not sure of the 2 i/c, though I have a F/O Fiorito noted.

Course 90 ran from November 29, 1943 to April 21, 1944. For the month of December we flew in Mk I Ansons, relics of the early days of the war. Their upper gun turrets had been removed, and a canvas cover glued over its position. They carried 6000 identification numbers. I am not sure whether we began using Mk V Ansons in January 1944, but we were using them in February, when they carried 12000 identification numbers.

Class work consisted of map reading, meteorology, plotting courses, true and magnetic, calculating wind speeds and direction, etc. Flying, we flew in pairs, (never the same pair twice),one as 1st Navigator, the other as 2nd, alternating. We were expected to work separately, but our reports at the end should have been the same. Where discrepancies occurred it was usually because the 1st navigator was giving the pilot "true" courses to fly, where "magnetic" ones were right. But some pilots, (all of whom knew the courses well!), sometimes fudged a bit, and despite getting the wrong course, managed to get to the correct turning points (turning points were usually small towns, or some readily identified object. Night flights required navigation by the stars using a sextant in the astrodome). Obviously someone's chart didn't hold up! I don't know whether there were any repercussions to the pilots. (Note: There were always two pilots in the aircraft. One of them stationed there was one that I had known for the first 10 years of my life, before we moved to Vancouver, and he and family moved to Edmonton. We have compared log books and for the entire time we were never in the same aircraft. He didn't know I was there, nor did I know he was.)

The names of the courses we flew - Astrograph, vertical line overlap, Square search, Compass Swing, Evasive Action, etc. have long since gone from my memory. The basic premise of all of them was to pinpoint, visually, or by bearing and distance, your actual position compared to the initial one, and by using the "Dalton" computer, determine the actual wind speed and direction and calculate a new course and airspeed in order to reach the turn point on time. All ended up with us dropping a 12 lb. bomb at the bombing range at Namao. The same rules applied in PFF, except that I had use of GEE, H2S and Loran to find our true position. (Even so, I wound up map reading on our final flight to bomb Berchtesgaden!).

More notes - Living quarters were the regular issue "H" huts, upper and lower bunks, with a foot locker. Ablutions hut in the middle. Food was good, certainly better than I had been having in the Army!, but it didn't appeal to some of the English. (Bangers and mash, anyone?) Snow and cold were other new items on their list. Complaints about their life in Canada were duly noted, and sorted out during the basketball games when Canadians lined up versus the rest. When some of them wound up with broken arms, so basketball was banned, and we were given a stick and a ring of rope to play with. There was no personal animosity in any of this. As this was winter, there was a skating rink, which was fine for most Canadians who had been skating since birth, but was a new experience for some of the others. I do not recall any organized hockey. Nor do I recall any drunkenness. That would have resulted in instant charges.

The course ended April 13, 1944, after which we all were promoted to Sergeants, and were given leave to head for home before heading for overseas. If memory serves, the Canadians were then promoted to Pilot Officers, (I was), but I am not sure about the Commonwealth graduates as there were Sergeant Navigators.

The course was called a Navigation Course for Navigators or Air Bombers. The Course was the same, I think your marks at the end determined whether you would be classed as a Navigator or an Air Bomber. Marks were out of 1000 for Ground work, and 1000 for Air Work. I got 821 for Ground Work, 816 for Air Work. Flying times 68.00 hrs Day-40:15 Night. Passed as Navigator.

I keep in touch with two, one of them from Vancouver, (he was our best man when Jeannie and were married, and I was his in Vancouver, after we returned), and one in England. 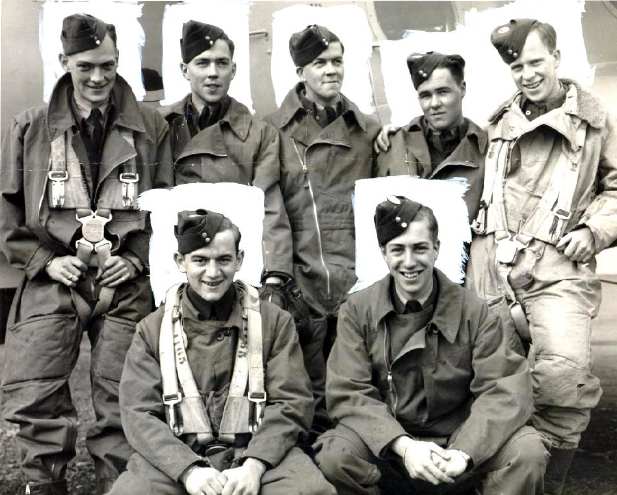