31 EFTS (RAF De Winton) was located thirteen kilometres east of the town of De Winton, near the confluence of the Highwood and Bow Rivers. The station was built during the late winter of 1940 and spring of 1941. 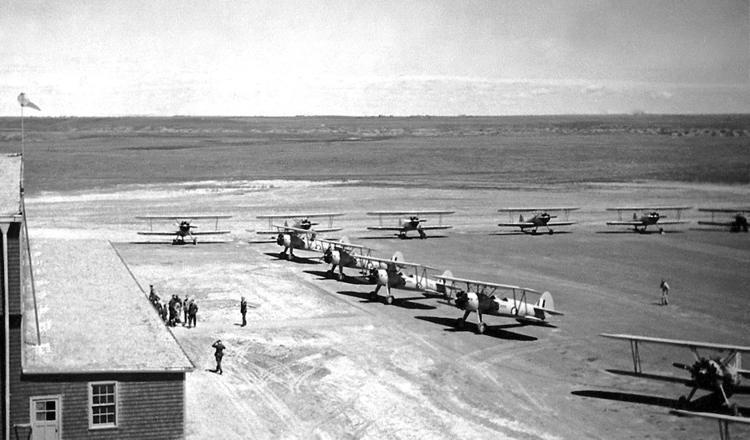 Stearmans as seen from control tower.

An entry on August 24th commented on a flying accident. "LAC Lohar, on an authorized flight, attempted to make a landing downwind on a ploughed field. The aircraft was a virtual write-off and LAC Lohar received injuries that proved to be more serious than was at first thought. He is now sitting up, however encased in some form of plaster of Paris and can even walk quite well. It is believed the accident was contributed to by his inexperience. The pupil comes from Mauritius and visitors to Colonel Belcher Hospital in Calgary seem to be quite amazed that he speaks with such an educated accent. This unit is certainly a veritable foreign legion and life is never dull."

Another entry on September 13th 1942 referred to the arrival of a certain lieutenant of the Free French forces. "Lt Maurice Jaquelin, Free-French untrained pilot, has reported for training. He has been in the French diplomatic service in Honolulu and is possessed, not only of the diplomat's well-known charm but also of the typical diplomat's wardrobe, fully stocked and supremely immaculate. It is the despair of every poverty-stricken Canadian and Englishman in the mess by whom it has been fingered with awe not unmixed with envy."

"During the past four months alone, six wives or parents have received news of fatal accidents at this school, all of which could have been easily avoided and that news is hardly likely to add to their gaiety this Christmas*.

One pilot graduate of No. 31 EFTS who became very well known post-war was Arthur Hailey, author of the 1950's and 1960's novels Hotel, Airport, and Runway Zero-Eight.

In 1941, as a young student pilot from England, Hailey was afflicted with airsickness during most of his early flight training. He was scheduled to be 'washed-out'. But a perceptive Instructor allowed Hailey to repeat the Elementary Flying Course and he successfully overcame his problem. He went on to receive his wings at Service Flying Training School, and later flew fighters in the Middle East and transport aircraft in India.

It should be noted that, like almost all the EFTS's in Canada, No. 31 became civilian operated and during the summer of 1942, civilians and their families arrived from their former base at Malton, Ontario. The Toronto Flying Club had operated and administered No. 1 EFTS at Malton until that school was closed due to flying congestion in the Toronto area. Of course, the Royal Air Force remained in charge and responsible for the flying curriculum and accreditation. Most of the civilian personnel of the Toronto Flying Club and their families found accommodation in and around the village of De Winton. 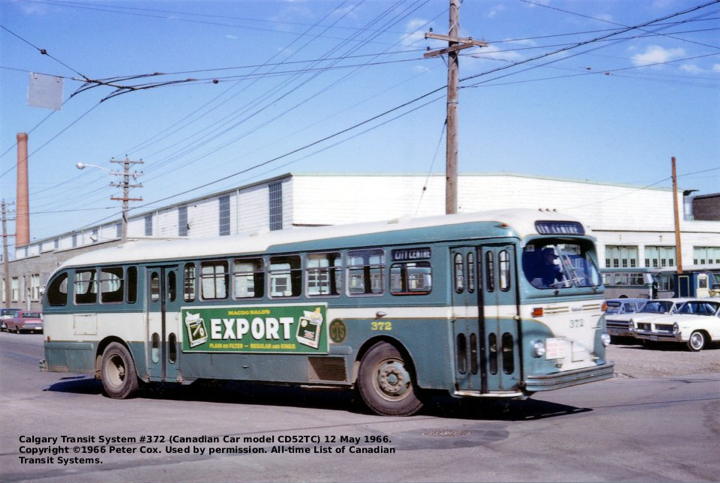 On the prairie overlooking the confluence of the Highwood River and the Bow River, just south and a little east of Calgary, there remain traces of a once-vibrant community formed during the early years of WWII. This was the wartime home of No. 31 Elementary Flying Training School (EFTS) De Winton, a Royal Air Force (RAF) training establishment for young men who would eventually take the war to the enemy by way of the air.


Many of the schools were built from scratch, usually upon a section of farmland that was cleared and upon which an entire airport was constructed in record time. The main goal was to get a place to fly from as quickly as possible and then to start providing a sense of community for the staff and trainees together. It was thought that high morale would result in efficient training and that would help channel an almost endless supply of aircrew, primarily to England, to achieving ultimate victory.

Training continued at every possible moment of the day and night with the commanding officer exhorting pupils and ground crew alike to do their utmost to pack in all the flying hours possible and as safely as possible. In his letter to base personnel in the Christmas 1942 issue of The Gremlin, the school's paper, Watts touched on these topics, among others. "During the past year, pupils from nearly twenty free nations have carried out their training here and today many of them are carrying to Hitler not a Christmas message but one which unfortunately he is best able to understand. . . Ground engineers must understand that they will continue to be badgered for aircraft during 1943 exactly as they have been hitherto (by this time I expect they are used to it). For my part I shall be content with 99 percent serviceability. I expect no department to be perfect. . . The past year has been marred by far too many flying accidents, the vast majority of which were due to deliberate breaches of flying regulations. Even the most dim-witted pupil will realize the orders laid down are for his own safety and he would be the first to complain if a ground engineer carried out an inspection on an aircraft in the same damn fool way in which he, the pupil, attempts to fly it. During the past four months alone, six wives or parents have received news of fatal accidents at this school, all of which could have been easily avoided and that news is hardly likely to add to their gaiety this Christmas. . . To everybody on the Station, I wish a Happy Christmas and the best of luck for 1943. May it prove to be the best year yet for De Winton."

And 1943 did, indeed, turn out to be a banner year for this little flying school. In February, it was learned that the head of the Czechoslovakian Military Mission in Canada, Wing Commander J Ambros, would visit the school to confer Czechoslovakian Honorary Wings to Squadron Leader Watts and Flight Lieutenant R F Eastwood, chief flying instructor, the award having been made in London by General S Ingr, Czechoslovakian Minister of National Defense. The honor was in recognition of the high caliber of training received at De Winton by Czech students.

In April, a remarkable 10,000 hours of flying training were completed and the school was informed that it had been named the winner of the Efficiency Pennant for the most efficient EFTS in Canada during the first quarter of the year. In May, the school learned it had won the "Cock O' The Walk" trophy. The Calgary Herald quoted Air Vice-Marshal G R Housam, air officer commanding No. 4 Training Command, when he presented the Efficiency Pennant to the assembled personnel of De Winton. "Your station has been awarded the Minister's Pennant and in addition the "Cock O' The Walk" trophy as being the most efficient elementary flying training school in the British Commonwealth Air Training Scheme and the winning of the double award means much. You have achieved the highest standard of efficiency of any elementary school in the world and there is no other flying training organization compared to your own."

Within a year, RAF De Winton would close. But in the meantime, base instructors and ground personnel continued to produce outstanding elementary trained pilots who were then posted to advanced service flying training schools across the country. The international complexion of the school never faltered, especially when 84 French naval aviation trainees arrived in March 1944 from St Hubert, Quebec. The daily diary reported "The unit took on a strange appearance as these strangely garbed sailors with a typically nautical gait walked about the camp. We are thinking of calling ourselves HMS De Winton and the more serious minded are considering evening classes in the French language."


On August 26, the daily diary reported on the end of the school. "The Station is closed. It no longer exists on paper and the last cadets have gone. A few of the officers hang about but they are only here because they must await transportation to get them away. And so it is goodbye to De Winton No 31 and on to things to come."

To finish this very brief account of some of the life and times of No 31 Elementary Flying Training School, here is a poem written by LAC Rowley, nationality unknown. It is entitled "The Rookies."


The author, Tim Johnston, retired recently after serving nearly 30 years as an executive staff officer with the Alberta Teachers' Association. He has carried out considerable research into all the schools of the British Commonwealth Air Training Plan and shares what he has found freely with others interested in the Plan. Johnston now lives in Calgary with his wife Rebecca, an artist and retired teacher. He can be reached by email at [bcatp(at)hotmail.com]

Excerpts from the Daily Diary of No 31 EFTS are derived from microfilmed copies of the complete diary provided through the courtesy of the National Archives of Canada. Information on Squadron Leader Watts' personal history was provided by way of correspondence with his wife, Mrs Vera Watts, now deceased. 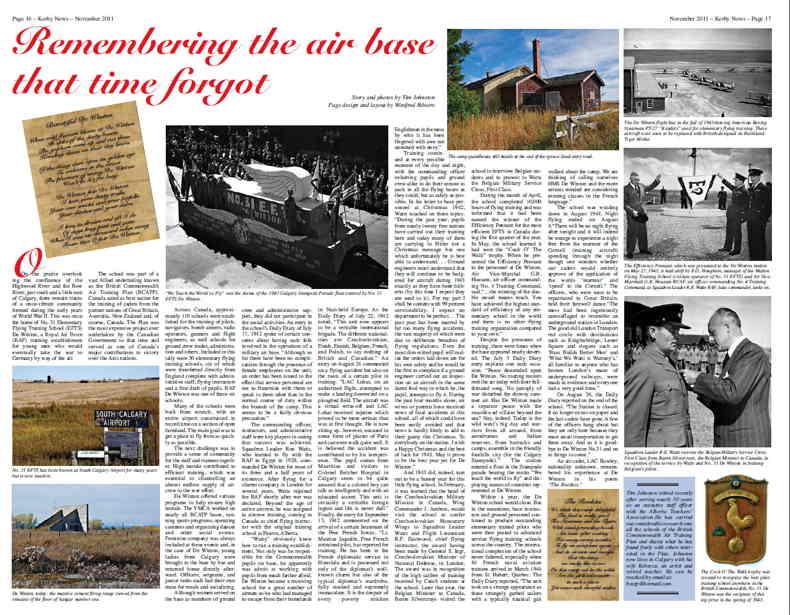