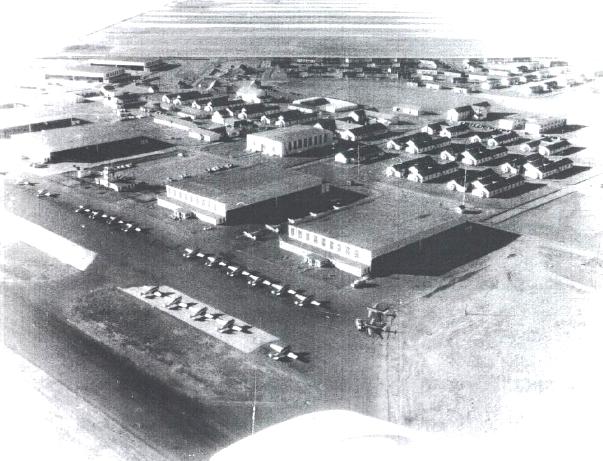 During the years of 1943 and 1944 activity at the school reached its peak of efficiency. Two hangars were added and many other alterations and improvements were made including the addition of bowling alleys.

The Wings Parade of March 29, 1945 was the final event as No. 15 SFTS Courses 121 and 122 received their wings, a total of 122 airmen. An aircraft display, both in the air and on the ground, a performance by Squadron No. 12, and lunch served in the officer's mess followed the Wings Parade. This last event at No. 15 EFTS coincided with the closing of similar schools across Canada. 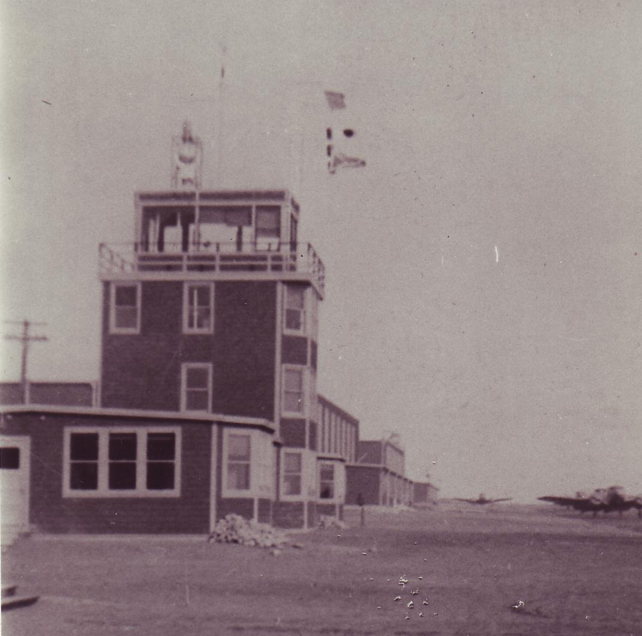 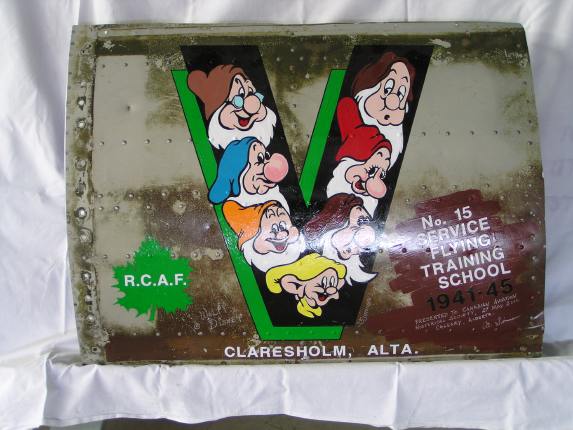 In June of 1939, Walt Disney received a letter from Aviation Cadet Bert Stanley, USNR, who was training at San Diego.
He suggested that Disney might design an insignia for the aircraft squadron aboard the Navy carrier, USS Wasp.
Disney turned the job over to artist Hank Porter, and from his pen came a belligerent wasp wearing six boxing gloves.
The new design was painted on aircraft, flying jackets, letterheads and anything else including dishes.
It wasn't long before the Disney insignia was known from coast to coast.
Requests for insignia began to pour in each day, so, Disney summoned Porter and gave him a job.
Make as many insignias as you receive letters for.
The new design team grew to five artists, who created over 1,200 insignia from 1940 to 45.
The RCAF received 32 insignia officially created for them by the Walt Disney team.
The Seven Dwarfs on a "V" for Victory was officially designed for "A" flight [Cessna Crane] flying at No. 15 S.F.T.S. Claresholm, Alberta.
This was the only Disney insignia created for the province of Alberta in WW II.

Early in 1942 it was determined that No. 1 Flying Instructors School at Trenton, Ontario was not large enough to train the number of instructors required, so it was decided to form a second FIS. During April, 1942, six officers arrived from Trenton to start No. 2 FIS at Claresholm. To this nucleus was added 16 staff instructors from No. 15 SFTS to form two flights, and soon the School was operational flying Tiger Moths and Cessna Cranes. In September, 1942 the school was transferred to the BCATP base at Vulcan, Alberta where they stayed for some time before completing their operations at Pearce, Alberta.

After six years of inactivity, the station re-opened as No. 3 FTS with the purpose of training pilots for NATO utilizing Harvard aircraft. The station operated with a population of approximately 1100, including the civilian employees. There were more than 140 housing units on the base and an eight room school was built to accommodate some 250 pupils, plus a kindergarten. Two churches were built, a grocery store, and a barber shop. 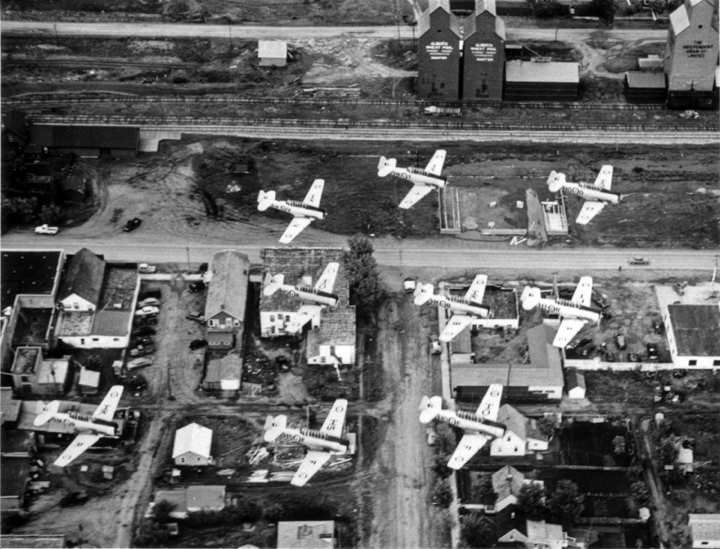 The Claresholm Cemetery is the final resting place for the following eleven airmen:
"Some did not live to fulfill their purpose. These brave souls stayed in Claresholm." 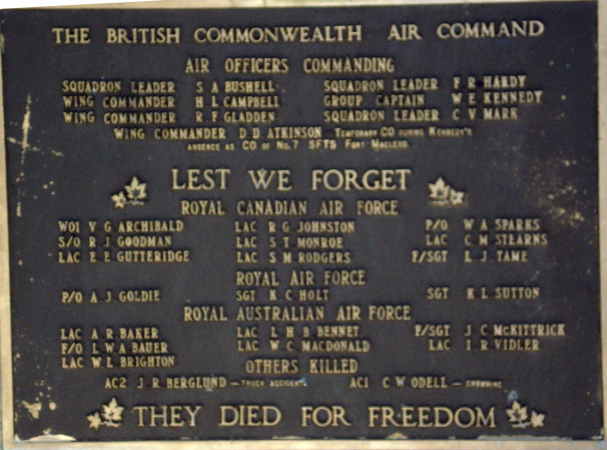 - On Wednesday April 29, at 10:30 AM, while in the front seat of a Tiger Moth, accompanied by Pilot Officer Jamieson RAF in the rear seat, the aircraft went down out of control from a height of about 350 feet, seven miles East of Stavely. P.O. Jamieson recovered from his injuries, and P.O. Holt was dead at the scene.

- Leading Aircraftsman Lockhart was born in Cardross Dunbartonshire, Scotland. (He is listed as Canadian, however I am unable to locate where he lived or joined the RCAF.)

- On Sunday July 5, 1942 LAC Lockhart, who had just arrived in Claresholm Friday July 3, from S.F.T.S. 11 in Yorkton, SK, went swimming in Willow Creek, and accidentally drowned.

- Saturday October 30, 1943 LAC Brighton was on a solo cross country flight the aircraft crashed in the Arrowwood area.

- On Thursday July 20, 1944 the Anson aircraft carrying the three Australians (F/S McKittrick, LAC Bennett, and LAC Baker)
crashed 2-1/2 miles northeast of Arrowwood. Cause of accident was investigated but the outcome wasn't reported.

- On Monday August 7, 1944 at 09:30 AM, Sergeant McHardy, was on routine instrument practise from AOS #1 Malton, ON. (Air Observer School) with Sergent W.J. Bruce RCAF. Weather was clear with unlimited visibility when there was an explosion in their Anson followed by the aircraft breaking up in the air. Both pilots were killed instantly.

- Sunday January 25, 1945 LAC Vidler, Pilot Officer Sutton, and Flight Sergeant L.J. Tame of Vancouver, died when their aircraft struck a ferry cable over the Bow River near Bassano. The body of Flight Sergeant Tame was returned to Vancouver.

- Wednesday February 7, 1945 Pilot Officer Goldie, was the pilot of an Anson departing Claresholm at 09:00, on a training flight. Shortly after take-off the Anson caught fire, control was lost and it crashed 3-1/2 miles east of the airport. 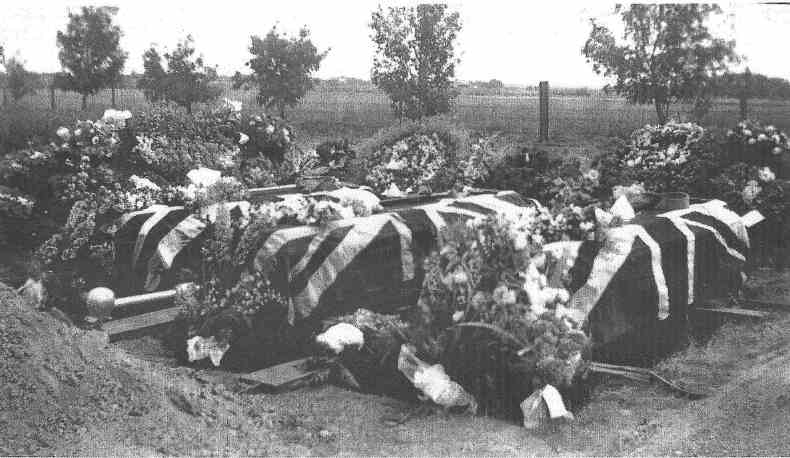