No. 37 SFTS was opened on 22 October, 1941 and was operated by the Royal Air Force. About 800 pilots received their wings at No. 37 SFTS during the War. Some had received their Elementary Flying Training in Britain, Australia or New Zealand but most were trained at one of the Canadian EFTS's.

The number of Ground Staff at No. 37 SFTS usually numbered around 300 persons and the Flying Instructors and pilot students could number up to another 250 at any one time. So the total number on the Base, may have been as many as 500 during peak years of operation in 1942/43.

No. 37 SFTS was located at the southern end of what is now the Calgary International Airport. Five standard, double BCATP hangars were constructed to the south of the runway system, as well as numerous barracks and facilities. Some BCATP hangars are still in use in 2010; one by 'Ken Borek' Aviation. The 'Drill Hall' of No. 37 SFTS, now just off McKnight Blvd, was also used for dances, boxing matches, and indoor Wings Parades (in times of inclement weather). It is the home of the Calgary Aero Space Museum.

The school began operations as a 'twin-engine' Advanced Flying Training School, using Airspeed 'Oxford' aircraft that had been brought by sea from Great Britain and re-assembled in Canada. Because of the relatively high altitude of Calgary Airport, the 'Oxford' take-off performance was less than satisfactory. The aircraft was powered by the Armstrong-Siddley 'Cheetah' X, engine -the same engine installed in the 'Anson' Mark.I but the 'Oxford' wing-lift capacity was much lower than the 'Anson'. An exchange was made for North American 'Harvard' aircraft from No. 32 SFTS, Moose Jaw SK in October 1942 and for the remainder of the war, No. 37 SFTS was a single-engine training base.

The 'Relief Field' for No. 37 SFTS was RCAF Detachment, Shepard that was also the site of No 2. Wireless School flying.

One of the RAF 'Harvard' Instructor pilots based at No. 37 SFTS during the war, was F/O Peter Middleton, the grandfather of Catherine Middleton who is now the Duchess of Cambridge and the wife of Prince William.

Training activity at No. 37 SFTS gradually diminished in early 1944, as pilot reserves were built up overseas. The Base was decommissioned and closed on March 10, 1944.


The main function of a Wireless Operator on a multi-engine aircraft during the War was to maintain contact with base stations, using CW (Continuous Wave) Morse code. It was a great deal more difficult to send and receive code while airborne, than in stable land-based radio stations; and Airborne Wireless Training was a major part of the curriculum at each of the four BCATP Wireless Schools.

Initially, the Training Curriculum for a Wireless Operator was 20 weeks, but was soon increased to 28 weeks due to the greater complexities of equipment, and procedures in overseas bombing operations. Trainees designated as Wireless Air Gunners were given a further six weeks training at a Bombing and Gunnery School. Towards the end of the Class Room Training, each Wireless Operator Trainee was tested in an 'aircraft simulator'. Small cubicles were constructed in a class room, complete with aircraft wireless equipment; that were meant to simulate the restricted working space for wireless operators on an actual aircraft. Each Trainee in a cubicle communicated by Morse code with an Instructor, and in-flight operating conditions and procedures were replicated as far as possible.

Following the 'airborne simulator' experience, the Wireless Operator Trainee was assigned to actual airborne training, on an aircraft fitted with current wireless equipment. Trainees at No. 2 Wireless School in Calgary received their airborne wireless training on aircraft operating out of RCAF Detachment Shepard.

In his book 'Wings for Victory', Spencer Dunmore relates how Aircrew Trainee Howard Hewer, and his entire course at No. 1 Initial Training School (ITS) in Toronto, were posted in September of 1940, to train as Airborne Wireless Operators at No. 2 Wireless School in Calgary, AB. This was the first 'Course' at the new School.

No. 2 Wireless School began using De Havilland DH-82C 'Tiger Moth' aircraft. Over the winter of 1940/41 it was found that the 'Tiger Moth' was much too light an aircraft for local weather conditions, and was under-powered to carry two crew members and the heavier radio equipment of that era. The extra strain on the Gypsy Major engine contributed to a series of engine problems.

On November 10th, 1941 - a De Havilland 'Tiger Moth' on a training flight from No. 2 Wireless School crashed in the yard of Big Hill Springs School - about 25 miles from it's base at Shepard. Sadly, both Airmen died. The schoolteacher, Frances Walsh, was awarded the George Cross for her heroic efforts to save Karl Gravel, an eighteen year old wireless student. Ms. Cross's medal is on display at the Bomber Command Museum of Canada.

In early 1942 the 'Tiger Moth' aircraft at No. 2 Wireless School were replaced by a Canadian designed plane, the Fleet 'Fort'.

An Instructor/Staff Pilot at No. 2 Wireless School in 1942, Jack Merryfield, noted that the 'Fort' aircraft at that Base made fourteen forced landings in one three month period. Most of the problems were engine related -leaking oil tanks, broken oil lines, overheated engines, etc. One re-current problem with the Fleet 'Fort' was the in-flight loss of the fuel tank cap, often resulting in the fuel being siphoned overboard. As with the 'Tiger Moth' in the earlier operations at No. 2 Wireless School, the Fleet 'Fort' was under-powered for the weight of two crew members, and the heavy radio equipment - no doubt contributing to the on-going engine problems.

Beginning in early 1943, the Fleet 'Fort' was replaced by North American 'Harvard' aircraft at No. 2 Wireless School. With the greater emphasis in the BCATP on twin-engine pilot training, and with increased production of the 'Harvard's' these aircraft became more readily available. The much greater engine power of the 'Harvard' meant that the heavy radio equipment installation could be handled with ease. There were no significant engine problems with the 'Harvard', as had been the case with the 'Forts'.

No. 2 Wireless School in Calgary ceased operations on April 14th, 1945 and RCAF Detachment Shepard closed on that date as well.

RCAF Detachment Shepard was located in the area just east of the intersection of Deerfoot Trail and Barlow Trail. The buildings were all removed many years ago, but the runway system was used until September of 1998 by the Alberta Motor Association for driver education. The site was developed as an Industrial Park in 2003 and there is now no remaining physical evidence of RCAF Detachment, Shepard.

RCAF Detachment Shepard also functioned as the 'Relief Airfield' for No. 37 SFTS, Calgary - from June 1941 to September 1944. 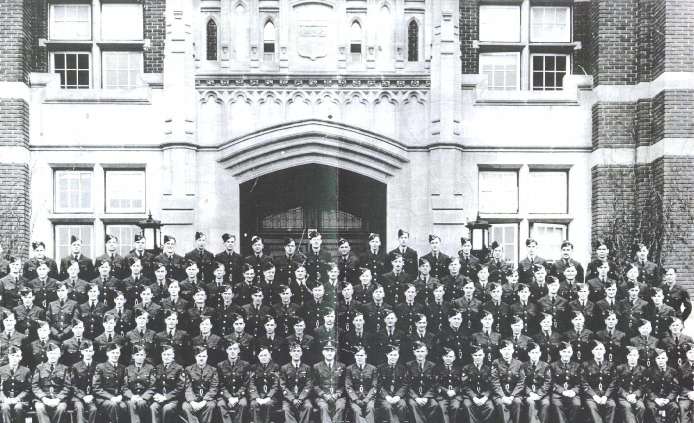 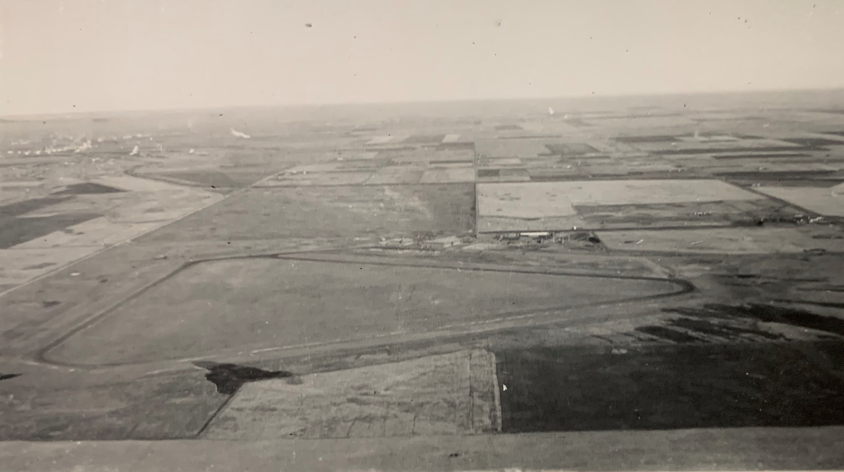 During 1938 and 1939, two Operational Squadrons of the RCAF were based at the Calgary Military Air Field: No. 1 (Fighter) Squadron flew Armstrong-Whitworth 'Siskin' bi-plane fighters and No. 3 (Bomber) Squadron flew Westland 'Wapiti' bi-plane bombing aircraft. In late 1939, the RCAF based several Hawker 'Hurricane', modern fighter aircraft at the Calgary Military Air Field.

In 1940, the barracks, aircraft hangars, and other support buildings of No. 3 SFTS were constructed. The buildings of Mount Royal University are now located right in the middle of what was a very busy twin tri-angular runway system. In the year 2011, the five hangars of No. 3 SFTS are still in place just north of 'Richardson Way', the road that marks the line of the concrete taxi-way, in front of the hangars.

Throughout the Second World War, No. 3 SFTS operated as a 'twin-engine' school. Initially, the aircraft type flown was the Avro 'Anson' Mark I. The 'Anson' Mk. I aircraft were 'war-weary' planes shipped from Great Britain. Most of the aircraft had earlier flown at Training Bases in the UK, and in some instances had operated as coastal patrol aircraft in Great Britain, in late 1939 and early 1940. The 'Anson' Mk.I was notorious for having 'hand-cranked' retractable landing gear.

The 'Anson' Mark II began to enter the inventory of No. 3 SFTS in 1941. The Mk. II aircraft were built in Canada, powered by American 'Jacobs' L6-MB engines, that were more powerful than the 'Cheetah' X engines of the 'Anson' Mk. I. There were other modifications/improvements on the 'Anson' Mk.II, notably the addition of hydraulic powered, retractable landing gear. An improvement greatly appreciated by every pilot that flew both the Mk.I and Mk.II 'Anson'.

No. 3 SFTS was the last BCATP SFTS to close when it ceased operations on September 28th, 1945. Over 1,100 pilots graduated from, and received their Pilot's Wings at No. 3 SFTS -one of the highest totals of all the BCATP Schools.

Following the Second World War, the hangars, and some support buildings of former No. 3 SFTS were occupied by, and refurbished by the Canadian Army and have been in constant use ever since. One of the former hangars served for several years as the home of the 'Calgary Farmer's Market'.

During the summer of 1940 a BCATP Relief Airfield was constructed a few miles east of the town of Airdrie. The airfield included a single set of 2800 foot triangular runways, a hangar, and a few support buildings. The airfield was designated as the Relief Field for aircraft operating out of RCAF No.3 SFTS. The airfield remained in operation until the closure of No. 3 SFTS.

Some BCATP buildings at RCAF Detachment Airdrie are still in use, including the hangar which is currently used by a construction company. 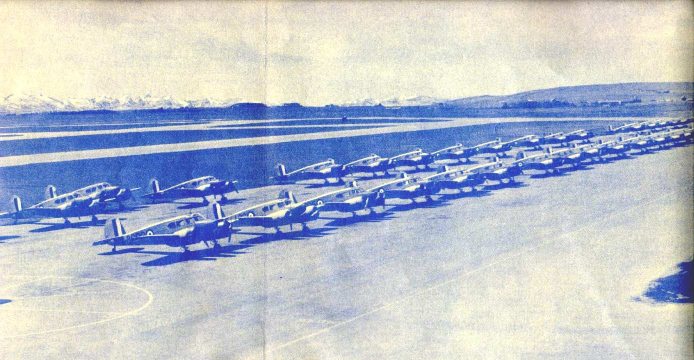 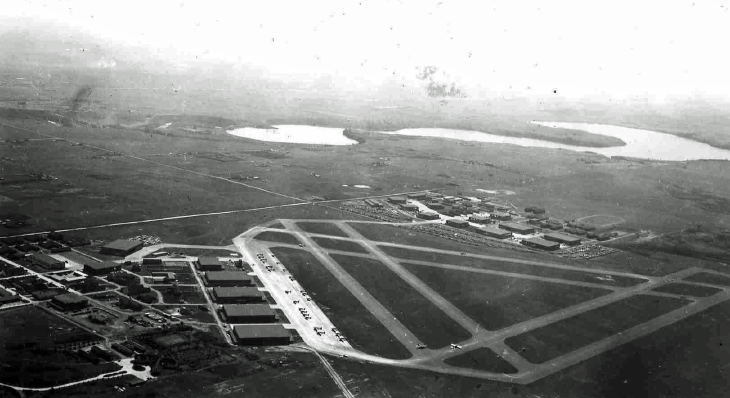 Looking southeast to No. 3 Service Flying Training School (left) and No. 10 Repair Depot (right) with the runways they shared in between.
Note what is now Crowchild Trail running north-south at the edge of the two schools
with what is now Fiftieth Avenue heading east from No. 10 Repair Depot.
Glenmore Reservoir may be seen in the distance.
[ courtesy Richard Brown ]

RCAF No. 10 Repair Depot opened in June of 1941, on a site to the south of No. 3 SFTS that had opened in October, 1940. No. 10 RD was responsible for the overhaul and repair of all aircraft flown at BCATP bases in No.4 Training Command -essentially all of Alberta, British Columbia, and parts of Saskatchewan. Recovery of aircraft damaged in accidents was also performed by personnel of No. 10 RD.

Aircraft repaired at No. 10 RD used the No. 3 SFTS runways for flight testing before delivering the aircraft to BCATP Schools. No. 10 Repair depot closed in September 1945 at the same time as No. 3 SFTS.

Interestingly, shortly after the opening of 10 RD, it received and assembled a number of Anson Mk I aircraft that had been built in the UK, shipped across the Atlantic, and then across Canada by rail.

Canadian Pacific Air Lines, Ltd. contracted with the RCAF in June, 1951 to operate No. 10 Repair Depot, Lincoln Park, Calgary. Legendary WW-I Pilot Wop May was appointed as manager by CPAL, until his untimely death in 1952. Work at the Repair Depot included overhaul, maintenance, recovery and re-furbishing of RCAF Military aircraft until the Repair Depot was finally closed in 1964.

The buildings of former No. 10 Repair Depot were located northwest of the junction of Crowchild Trail and Glenmore Trail. 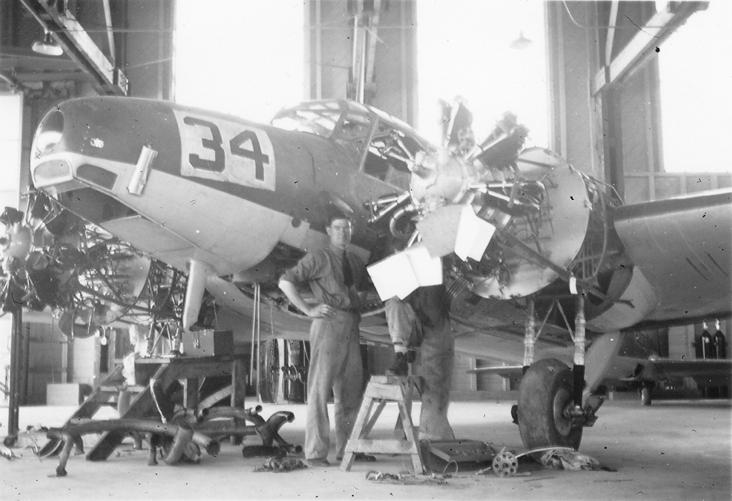 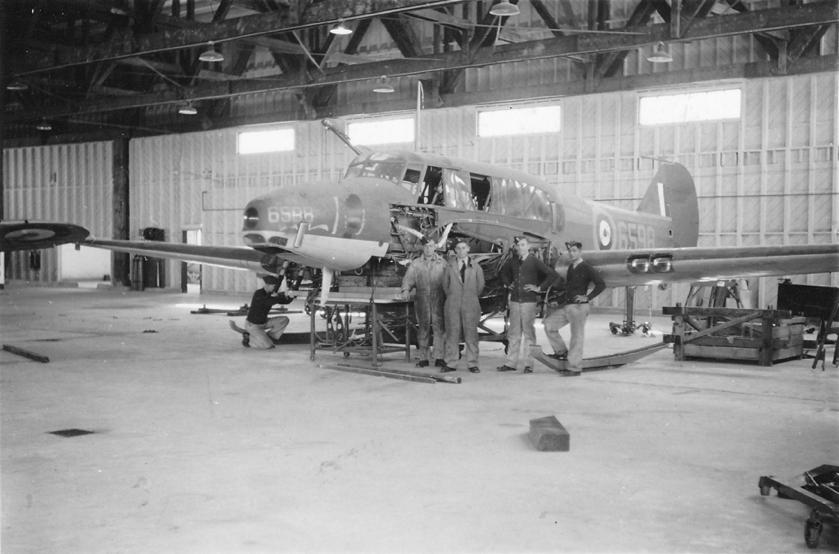 No. 11 Supply Depot was located in the Ogden area of Calgary, directly adjacent to the railway lines of Canadian Pacific Railway Ltd. The Supply depot consisted of perhaps 20 one-story warehouses; several two or three stories warehouses; and barracks and support facilities for personnel working at the base. The facility provided logistic support to BCATP Bases in British Columbia, Alberta and parts of Saskatchewan: supplying everything from aircraft parts, furniture, uniforms, and bedding - to food and bathroom supplies. 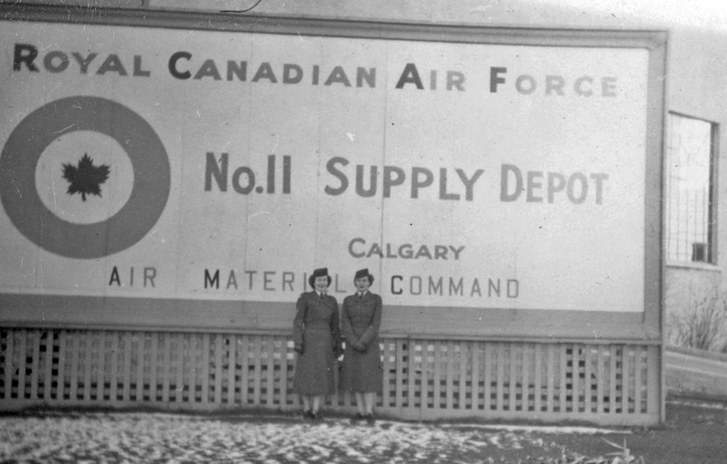 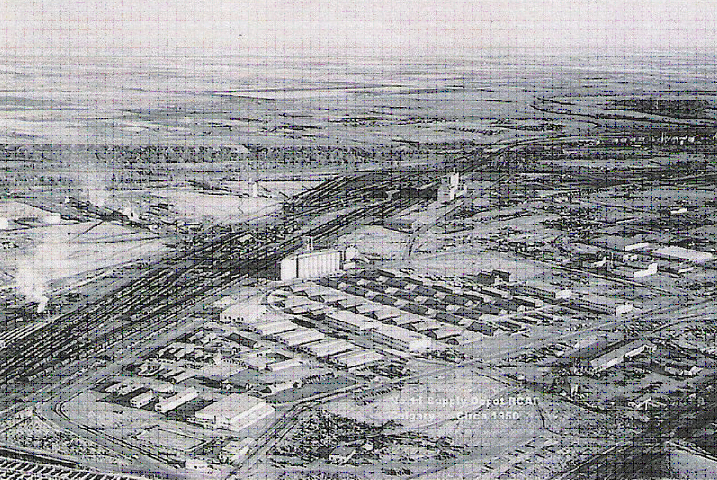