The Americans In The RCAF


The establishment of the British Commonwealth Air Training Plan was noted by both trained pilots and would-be airmen south of the border. Experienced Canadian pilots needed as flying instructors and for other duties were quickly recruited by the RCAF, but many more were required. At the same time many young Americans, for various personal reasons, wanted to get involved in the air war. They began appearing at RCAF recruiting centres near border crossings causing some embarrassment to Canadian authorities. Canada had declared war on September 10, 1939 but it would be well over two years later that the United States joined the Allies in the fight against the Nazis. 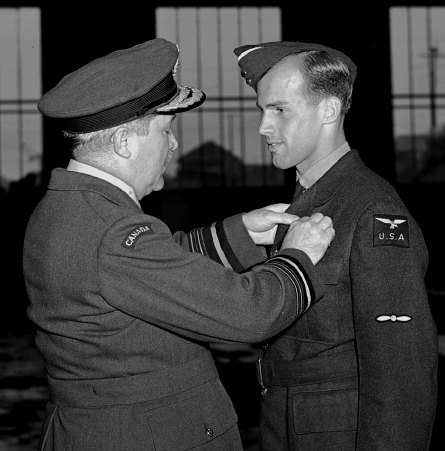 
Together with Homer Smith, another Canadian WW I pilot who had fallen heir to an oil fortune and had promised financial backing, Knight rented a suite in the Waldorf Hotel in New York City and opened branch offices in fine hotels in various cities across the US, each with a manager and staff. Unable to advertise in the media, the committee's recruiters depended on word-of-mouth references and brochures sent to aviation schools and airports that simply noted that the Clayton Knight Committee would assist applicants interested in the many positions available in both British and Canadian aviation.

One problem was that upon joining the RCAF, recruits had to pledge allegiance to the British monarch, something that could result in forfeiture of citizenship for the young Americans. This obstacle was removed when the Canadian government passed an Order in Council replacing the oath with a temporary agreement to obey RCAF rules and discipline for the duration of the war.

During November 1940, a note from the American State Department was released stating that the Clayton Knight Committee was openly spending Canadian government funds to lure Americans to Canada to serve in the RCAF and that this was in violation of American law.

In response, the Canadian government created the "Dominion Aeronautical Association" as a buffer between the Clayton Knight Committee and the RCAF. Correspondence by the Committee with potential recruits was directed to the Association. When recruits arrived at their office in Ottawa they were told, "We really haven't anything for you right now but maybe the RCAF does. Their office is right next door."

With the enactment of lend-lease legislation in March 1941, the American government made it easier for its citizens to join the RCAF by treating the enlistment of its citizens in Canadian forces as part of its aid policy and exempting such recruits from its own military draft.

After Pearl Harbour was attacked, everything changed. Young Americans wanted to join their own air force which was welcoming recruits, not Canada's. The Clayton Knight Committee's work was done, having been responsible for sending 900 trained aircrew and 1450 trainees to the RCAF, as well as 300 pilots to the RAF.

Other young Americans had made their way to Canada on their own and by the time the United States declared war against the Nazis in December 1941, approximately 9500 American citizens had joined the Royal Canadian Air Force, having made their own personal decision to enter the war. According to Spencer Dunmore, author of "Wings for Victory," "They were colourful, those volunteers -professionals and playboys, convicted felons and husbands on the run, idealists and mercenaries, kids seeking adventure, youngsters seeking nothing but an opportunity to fly, middle-aged men looking for work -and to all of them, the RCAF's need was their golden opportunity.

Of these 9500, about 800 were killed in RCAF service and of these 449 have their names inscribed on Canada's Bomber Command Memorial Wall on the front lawn of the Bomber Command Museum of Canada.

After Pearl Harbour 1759 American members of the RCAF transferred to the armed forces of the United States. Another 2000 transferred later on and about 5000 completed their wartime service with the RCAF.

Arguably the most illustrious of the Americans in the RCAF was Wing Commander Joe McCarthy DSO DFC and Bar of Long Island, New York. W/C McCarthy played a leading role in the well-known "Dambusters Raid" and completed a distinguished wartime and post-war career with the RCAF.

Another renowned American in the RCAF was Pilot Officer John Gillespie Magee, author of the classic aviation poem, "High Flight". P/O Magee was killed in 1941 while serving as a Spitfire pilot with No. 412 Fighter Squadron RCAF.

Another American in the RCAF was F/Lt. Charles Lesesne whose aircraft was hit by flak and then attacked by three enemy Me-262 jet fighters. F/Lt. Lesesne ordered his Canadian crew to abandon the No. 425 Halifax, struggling to hold the aircraft steady as they did. Sadly, he was badly injured in the attack and later died on the ground in the arms of his wireless operator. F/Lt. Lesesne's was one of 449 Americans whose names appear on Canada's Bomber Command Memorial.